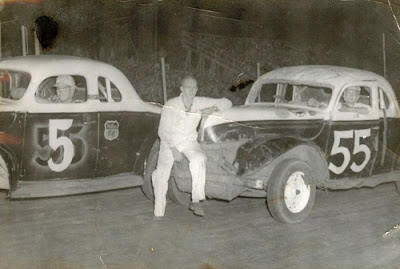 by Lee Ackerman
Omaha, Neb. — Every so often a person comes along that just has a natural gift. People who are blessed with great mechanical skills have always fascinated me, probably because I have always lacked in that area. We all know that if you go to Charlotte or Indianapolis, you can find many of these mechanical wizards.

But you don’t have to go that far to find them...
Let’s take a little trip back in time to a hot bed of racing in Western Iowa. To Harlan, and to a mechanic, who’s cars won races from the local scene to NASCAR and most levels in between. His name was Dale Everett Swanson.

Dale Swanson was actually born in Monona County, Iowa, in 1918 in a little town called Castana. In his youth, he moved with his family to a farm near Mondamin, Iowa, and in 1936 graduated from Mondamin High School. Later the family moved to a farm near Harlan where Dale continued to farm. In August of 1941 Dale married Phyllis Kohles and in 1942 they moved to Harlan where Dale would operate gas stations and auto repair businesses.

In the late ’40s, Dale got the racing bug. After the war, racing had started up again at the Shelby County Fairgrounds and Dale tried his hand. He soon found that although he prepared good race cars, he lacked driving skills. It just so happened that another driver was struggling as well, he was a good driver, but his cars were not reliable. So, the two decided to team up, Dale preparing the cars and the other driver would drive. That drivers name was Johnny Beauchamp. It didn’t take long and the pair was winning, something they would do a lot over the years. First, in hot rods, Dale even promoted a hot rod race at Harlan. Soon the pair was winning hot rod races all over western Iowa and Nebraska.

In 1950, they moved to the coupes and won most of the races in which they were entered. In 1951, they won the championship at Playland Park Speedway. About this time, Swanson built a second car for another Harlan area driver, DeWayne “Tiny” Lund. Swanson cars dominated races in the area, with Beauchamp in the No. 55 and Lund in the No. 5. At some point the team just wore out and decided to take a break from racing. I asked Dale Swanson Jr., where the number 55 came from. He said, “Well one night Dad had a very good night playing craps, he kept winning when two fives came up, so he decided that would be the number on his race car.”

In 1955, an individual named George Short decided he wanted to go IMCA racing. So, he hired Dale as the crew chief and Johnny Beauchamp as the driver. They raced a ’55 Chevy with the familiar No. 55 on it. On August 16, they won their first IMCA feature at the Crawford County Fairgrounds in Denison, Iowa. On August 21, they won again at Wausau, Wis. They would win five races that first year and finish sixth in IMCA points despite getting a late start to the season. In 1956, with Chevrolet support Dale became the car owner as well as the chief mechanic and the two decided to run the entire IMCA Stock Car schedule. The results were overwhelming! Forty-three wins as they ran away with the championship.

In 1957 they successfully defended their IMCA championship winning 32 races and pulling away to another championship after an early season battle with Roy and Bob Burdick. It was a promoter's dream, Chevrolet versus Ford. Before that season started, Dale spent time at the General Motors facilities building cars for General Motors to run in NASCAR. One of those cars, the No. 50 owned by Hugh Babb finished second in the 1957 beach race at Daytona Beach driven by who else, Johnny Beauchamp. During this time Dale found time to open a Johnson Outboard Marine dealership in Harlan. It was a business he would continue until his death.

In 1958, campaigning a partial IMCA season without General Motors support, the Swanson-Beauchamp combo won four races and finished fourth in the points. In 1960, the two combined to run nine races in the NASCAR Grand National Division (now the Cup Series). They made their debut at the new Charlotte Motor Speedway in the inaugural running of the “World 600”. They finished second to Joe Lee Johnson. They would have five top-10 finishes in those nine races with the highlight being a win at the Nashville Fairgrounds on August 7, 1960 in a rain-shortened event.

In 1961 Beauchamp would drive the No. 73 Swanson car in one of the 100-mile Daytona qualifiers. It was during this race that Beauchamp and Lee Petty (principles in the controversial first “Daytona 500”) would both be hurled over the guardrail in a frightening accident that pretty much ended Lee Petty’s racing career. His car destroyed; Dale worked on Smokey Yunick’s pit crew for the 1961 “Daytona 500.” Marvin Panch ended up winning the race for Yunick.

In 1962, Swanson and Beauchamp would team up to win one last race together, the prestigious “Iowa International 300” at the Iowa State Fairgrounds in Des Moines. During this time Sonny Morgan would occasionally drive for Swanson. In 1964, Dale opened a new automotive business in Harlan, and discontinued racing operations in order to grow the business. He would later return to racing at what he called “hobby racing” Dale would pass away in January 1996, but the Swanson racing legacy would live on, thru his son Dale, Jr. who was involved in racing for many years, and it still lives on today through his grandson, Ken, who currently lives in Charlotte, N.C., and has worked on a number of top NASCAR teams.

I’ve always been amazed by the logistics of racing back in the day, and one of my favorite stories is a story related to me by Dale Swanson, Jr. On July 3, 1956, IMCA ran an afternoon-evening doubleheader in Jamestown, N.D. The Swanson-Beauchamp team won both events. The next day, they were to run an IMCA race in Topeka, Kan. (Remember there was no such thing as Interstate Highways back then).

Dale made arrangements with his cousin, Russell Smith, an over the road trucker, to pick up Dale, Jr. in Harlan and meet him at Columbus around three or four in the morning. Well about seven or eight in the morning, Dale shows up with the race car, seems that Dale had decided to work on the race car in Jamestown after the races.

Off they went to Topeka, getting there just in time as the crews were already ironing in the track and they had to wait to get into the infield. Since they towed the race car, the first thing Dale had to do was put the drive shaft back in the race cars. That almost proved to be a serious problem as after jacking the car up with one of those old frame screw type jacks, and getting under to put the drive shaft in, the car tipped over almost trapping Dale, fortunately the car tipped the other way.

As for the race, Beauchamp was running away with it, building a several lap lead much to the disappointment of Promoter Al Sweeney who pleaded with Dale to slow Beauchamp down because he was ruining the show. Dale Jr. said, “I don’t know the exact words my father used but it was a definite NO.”
The Dodge Dealers of Topeka had put up a $500 bonus if a Dodge could win the race. Toward the end of the race, another driver in a Dodge hit Beauchamp in turn two and put him through the cyclone fence. They got the car back to the pits and made sure it was okay and sent Beauchamp out to finish the race. Beauchamp ended up winning the race despite a broken right front motor mount. The motor was riding on the fuel pump and cross member. Dale Jr. says, “We use to solder copper tubing rings to the radiator so if the fan hit the radiator it would skid on the rings and not cut into the tubs and drain the water. The fan was running on these skids at the end of the race.”

One final thought on Dale Swanson. If you see old pictures of Dale at the track, you will see that he always carried a trucker type wallet in his back pocket, attached to a chain. In the old days, they paid off the races in cash, and you can bet that with all the success Dale Swanson had, that wallet was always pretty full. The other drivers use to kid him and call him moneybags, with good reason.

Dale Swanson knew how to prepare race cars to do one thing, win, and win they did.