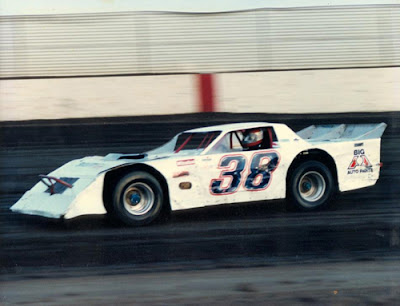 Tom Hearst of Wilton, Iowa, scored 42 feature wins in 1982 and won the NASCAR Grand American Weekly Racing Series national title. - Photo Courtesy of Kyle Ealy
Cedar Rapids, Iowa - With the quality of late model competition in the Midwest and specifically in Iowa, the chances of a 3 for 3 weekend sweep are indeed rare. On one weekend in May of 1982, Wilton, Iowa's Tom Hearst not only accomplished that feat but went one better.

Hearst was already off to a hot start to the young season before his fantastic weekend even started. He had scored two wins in the NASCAR Grand American Racing Series as well as two non-sanctioned tallies.

That early-season success would continue at Davenport Speedway on a Thursday night, May 6th, as he captured the first of what would be an incredible four feature wins. Dick Schiltz of Waterloo took second, Billy Moyer Jr. of Des Moines grabbed third, Bill Beuer of Wapello was scored in fourth and Duane Steffe of Colona, Ill., rounded out the top-five.

The next night at Hawkeye Downs Speedway, the hot streak would continue as he grabbed the 25-lap feature win over Dick Schiltz, Steve Spahr of Monticello, Kenny Fenn of Washington and Darrell Sells of Waverly, Iowa.

Saturday evening, May 8, he made the short haul to the Muscatine County Fairgrounds in West Liberty, Iowa. Luck played its part in Hearst's third straight win. Denny Osborn of Cedar Falls, Iowa led the first 18 laps of the main but was hurt by a couple of late restarts. Hearst, who started 12th, methodically inched his way to the front and eventually ran Osborn down for the lead and the victory. Osborn settled for runner-up honors, while Schiltz took third, Kenny Fenn fourth and Ron Pallister of Wapello, Iowa, fifth.

Sunday evening, May 9th, Hearst hauled his hot machine across the Mississippi River to Freeport, Ill., for their season opener. Hearst would start the race on the pole, grab the lead at the drop of the green and never look back, winning in convincing style over Freeport's Jim Jeffrey, Bob Grenoble of Nora, Ill., Steve Pfeiffer of Freeport and Tom Schony of Dakota, Ill.

A remarkable 4 for 4 weekend!

Driving for Keith Simmons and Gary Oliver, Hearst would continue his incredible run and take 27 of the 50 NASCAR-sanctioned races that he entered. Hearst would also score 15 of the 17 non-sanctioned races in which he competed. He would become the first NASCAR Grand American national champion in 1982.