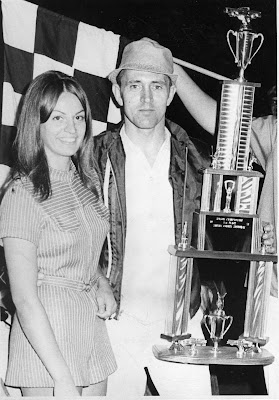 Jim Wyman of Oakland, Iowa, set a new track record at Shelby County Speedway in Harlan, Iowa, by winning six consecutive "A" features in a row in 1971. Wyman drove a 1971 Mustang Mach I.
2003 - Rick Eckert of York, Penn., started in the 11th spot and passed leader Scott Bloomquist of Mooresburg, Tenn., with 9 laps to go to win the Xtreme DirtCar Series 50-lap feature at Black Hills Speedway in Rapid City, S.D., on May 16. After leading the first 41 laps of the race, Bloomquist brought his car home in second. Dale McDowell of Rossville, Ga., Jimmy Mars of Elk Mound, Wis. and Darren Miller of Chadwick, Ill., rounded out the top five.

1982 - Steve Burgess of Eau Claire, Wis., got the jump on the field, then out raced Dick Trickle of Wisconsin Rapids, Wis., to win the 20-lap late model feature, Wednesday, May 12 at La Crosse Interstate Speedway. Dave Watson, Milton, Wis., took third, Tom Reffner of Rudolph, Wis., fourth and Marv Marzofka of Nekoosa, Wis., fifth. Trickle set fast time (19.714), won the trophy dash and his heat while Don Turner of La Crosse and Burgess were the other heat winners. Steve Holzhausen of Bangor, Wis., won the semi-feature.

1976 - Ernie Brookins of Fargo, N.D., edged Dave Bjorge of Austin, Minn., by half a car length to win the late model feature at the 2nd Annual Spring Invitational at Viking Speedway in Alexandria, Minn., on May 15. Joe Salner of Clear Lake, Buddy Watkins of Litchfield and Dave Knott of Wabasso rounded out the top five finishers.

1971 - A crowd of 3,080 at Shelby County Speedway in Harlan, Iowa saw Jim Wyman of Oakland, Iowa, make it clean sweep on Saturday night, May 14. Wyman, driving a 1971 Mustang Mach I, drove to victory in three events, the Harlan Chamber of Commerce Ambassador's trophy dash, the second heat and the 16-lap "A" feature. Finishing behind Wyman in the main event were Omaha's Glen Robey and Bob Kosiski, Dave Chase of Council Bluffs and Rich Lyons of Jefferson, Iowa.