Friends and foes: Schrader and Collins dominated like no other 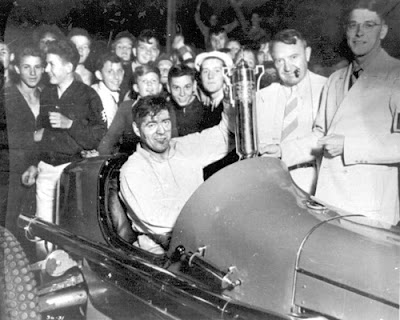 Emory Collins is joined by legendary racer Barney O' Field and WHO Radio announcer Ronald Reagan. - Bob Mays Collection
By Kyle Ealy
Cedar Rapids, Iowa - From 1933 to 1948 two men dominated sprint car racing like no other. Competitive on the track and friends off it, Gus Schrader of Newhall, Iowa and Emory Collins of LeMars, Iowa, thrilled millions of race fans across the United States and Canada.

Emory “Spunk” Collins was born in Sibley, Iowa in 1904 but his parents moved to Regina, Saskatchewan, Canada in 1907. He began working in a garage at age 9 and by the time he was 17, he started taking an interest in racing. A fledgling race car driver at the time, Collins was actually more noted for being an outstanding hockey player who had played for the Canadian National Team in the Olympics.

It was the promoter J. Alex Sloan, the self-proclaimed “Daddy of Dirt Track Racing” who brought Collins to the United States in the 1930’s hoping to make Collins a star for a professional hockey franchise in Chicago that Sloan was bidding on at the time. Sloan soon found out that Collins was a better with a steering wheel than a stick and it was then that Collins embarked on a stellar racing career.

One of the first places Collins raced at upon starting his career in the United States was the old Frontier Park in Cedar Rapids.

It was said that Collins was very superstitious and wouldn’t allow anyone to take his photo before a race. Collins drove the number 7, which was always painted red. After he retired, he mentioned that despite the perils of sprint car racing during that period, he was never upside down his whole career.

Another little-known fact about Collins was he would nervously bite his fingernails while traveling on public highways. When asked why, he replied, “At the track, they’re all going the same direction. You don’t have some incompetent driver coming at you head on.” 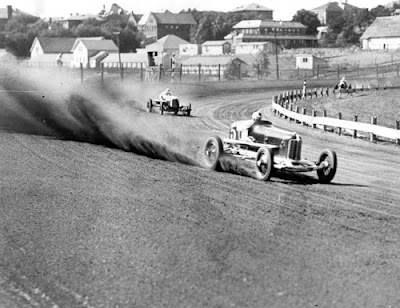 Gus Schrader was born in Newhall, Iowa on May 22, 1895. Schrader started racing motorcycles in his teens and turned to cars soon after World War 1, first racing Model T Fords, and then switching to Nash, which happened to be the dealership in Newhall.

Schrader held many track records all over and very few drivers could beat him, unless he wanted them to.

In the days before superspeedway racing (Indianapolis Motor Speedway was the only one at the time) dirt track drivers were larger than life heroes to many Americans and it wasn’t uncommon to see Schrader and Collins rubbing shoulders with politicians and movie stars such as Bob Hope, Bing Crosby and Jack Benny during their prime.

Collins and Schrader would put on a show that would leave the fans standing and yelling for more every time. “It was the most gosh darned demonstration of speed and skill you ever saw,” admired one gentleman. “There would be 20 cars on the track but as soon as Emory and Gus got out there, they’d head for the pits. They’d both have their Offenhauser's kicking dirt 50 feet up in the air going through the turns. They’d be going side-by-side in complete control of their cars. The crowd just ate it up.”

Schrader and Collins began their battles in the early 1930’s, racing throughout the country and gaining most of their fame racing IMCA competition. Schrader would win the national championship from 1933 to 1937. Collin would win the crown in 1938 on the very last race of the season. Schrader would regain the title in 1939 and defend it successfully until his untimely death in 1941.

With no racing from 1942 to 1945 because of World War II, Collins would have to wait until 1946 to grab his second national championship and to prove it was no fluke, followed that up with crowns in 1947 and 1948.

Off the track Collins and Schrader became close friends who enjoyed going fishing and hunting in Minnesota and Canada when autumn came and they put their cars away for the winter.

Sadly, Schrader lost his life in what was his “retirement” race. He and his wife Eunice had decided it was time to settle down on the family farm in Newhall. Schrader, having wrapped up his eighth IMCA national championship already, was lured into racing one final time, at the Louisiana State Fair in Shreveport on October 2, 1941.

He and another top driver in that period, Jimmy Wilburn, were racing side-by-side into the turn on the half-mile when Wilburn’s sprinter drifted out and Schrader’s didn’t. Schrader’s sprint car ran over Wilburn’s axle and flipped end over end 15 times. Schrader died two hours later of a skull fracture, concussion and cerebral hemorrhage. Schrader was only 46 years old.

Ironically, the car that Schrader lost his life in was only slightly damaged in the crash and repaired. In the following nine years, two more drivers would lose their lives in the very same car, Eddie Nicholson at the Milwaukee Mile in 1946 and Bill Anderson in Indiana in 1950.

It is believed that there was problem with the steering arm after Gus Schrader had converted the car to a cross-spring front. According to Charles Davis, who later owned the car, the spring shackle was mounted on the front axle, too close to the steering arm. In certain circumstances the arm could become entangled with the shackle and take the steering away. After Bill Anderson's accident, Peaches Campbell, who owned the car at the time, changed the steering geometry. The car was raced for many more years without serious incident.

Collins would retire from competitive racing in 1951 and settle down in LeMars, Iowa. Some say that if World War II hadn’t come, he would’ve won more than the four titles he earned. He passed away on June 2, 1982, in LeMars after suffering a heart attack.

Emory Collins and Gus Schrader were true pioneers of open wheel racing. They were daredevils not only because of how they raced but also what they raced.