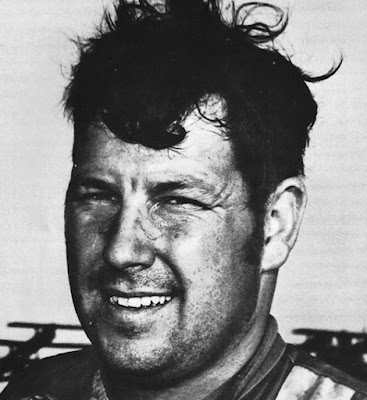 Gordon Blankenship
Knoxville, Iowa - It was a rare doubleheader weekend at the Marion County Fairgrounds in Knoxville, Iowa on May 15 & 16, 1970.
It was also a weekend of unfortunate tragedy. It started on Friday night where the stock cars were the headliner. Cedar Rapid's Bill McDonough grabbed the lead and remained there until lap 5 when a radiator hose blew and he spun out on the back stretch. The cloud of steam from McDonough's car was enough to blind several drivers and car after car careened into the wreck. Richard Montgomery of Oskaloosa took the worse spill rolling several times. He was uninjured.
From there, Gordon Blankenship of Keokuk, Iowa, making his first appearance at the half-mile this season, took the lead and never relinquished it in winning the 15-lapper. Dick Oldham and Phil Reece, both of Des Moines too place and show, Mike Brooks of Hartford, Iowa nabbed fourth and George Barton of Ankeny, Iowa was fifth. Oldham took trophy dash and first heat honors, while Brooks and Reece grabbed heat wins as well. Don Hoffman of Des Moines took the consolation.
Keokuk's Lem Blankenship set a new track record, besting Liscomb, Iowa's Bob Bonzer's old mark with a time of 24.24 seconds.
Saturday night was reserved for the super modifieds. A hearty crowd of 3,505 race fans were on hand to see the very best in the Midwest compete. 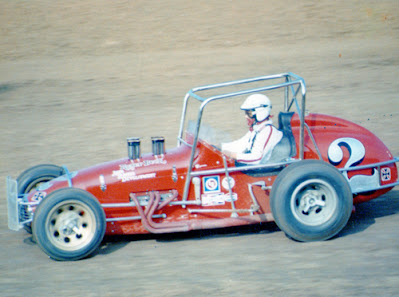 Joe Saldana
In the 25-lap feature, Joe Saldana of Lincoln, Neb., edged Kansas City's Dick Sutcliffe in the feature that paid the winner $500. Jerry Blundy of Galesburg, who set fast time (22.11) took third. Del Schmitt of Topeka and Jerry "Flea" Atkin of Holt City, Mo., rounded out the top five finishers.
Saldana won the trophy dash and first heat. Sutcliffe, Ralphie Blackett of Des Moines won the third heat and Bill Utz of Sedalia, Mo., took the consolation victory.
Unfortunately, just as the evening's program was getting started, tragedy struck. Jay Opperman, brother of the legendary Jan Opperman, died when his super modified rolled end over end 10 times during the second heat race.
Jay, who was racing for the first time in the Midwest since moving from California, had hoped to follow in his brother's footsteps. He was pronounced dead shortly after being transported to Collins Memorial Hospital in Knoxville.