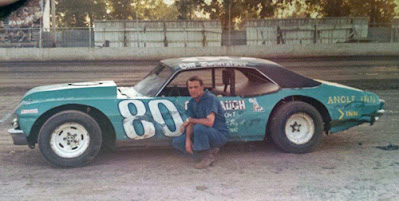 Bill Zwanziger had a successful weekend, May 2-4, 1975, going three for three feature wins at Davenport, Eldon and Cedar Rapids. He's shown here at Eldon, Iowa.
2002 - Peoria Speedway honored their owner Chuck Hamilton who passed away on April 25. As a final salute, over 100 stock cars pulled out onto the quarter-mile that Hamilton and his widow Sherrie had operated for the last 14 years. As for the evening's action, Billy Tuckwell (late model), Jeff Maher (modified), B.J. Richardson (sportsman) and Doug McKendrick (street stock) were winners.
1998 - Tommy Myers of Blooming Prairie, Minn., took home the IMCA modified season opener at Hancock County Speedway in Britt, Iowa on Friday, May 1, 1998. Ed Wolf of Algona, Iowa made a clean sweep of the IMCA stock car class and Marathon, Iowa's Jeremy Mills dominated the IMCA hobby stock feature.
1975 - Bill Zwanziger of Waterloo, Iowa and Curt Hansen of Dike, Iowa pulled off late model hat tricks over the weekend. Zwanziger captured wins at Davenport, Iowa on Friday, May 2, Eldon, Iowa, on Saturday, May 3 and Cedar Rapids, Iowa, on Sunday May 4 in the Star Engineering/Cronbaugh Transport Chevrolet. Hansen started his triple crown run in Oskaloosa on Wednesday, April 30, continued with a victory at Columbus Junction, Iowa on Friday, May 2 and completed the tri-fecta with a win in Denison, Iowa on Saturday, May 3 before a capacity crowd of 3,100 race fans.
1970 - Ramo Stott beat fellow "Keokuk Komet" Ernie Derr in the 30-lap late model feature at I-70 Speedway near Kansas City on May 2, 1970. Stott was also a heat winner. Derr copped trophy dash honors. In the other part of the program, Jerry Blundy captured the 30-lap super sprint car main event and also set a new track record in qualifying with a time of 18.15. Dick Sutcliffe captured a pair of wins, copping the trophy dash and the second heat.