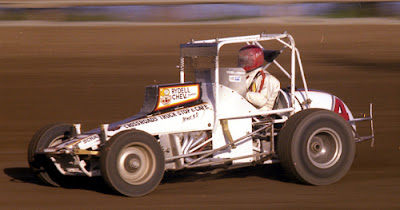 Don Mack of East Grand Forks, N.D., won double features at Buffalo River Speedway in Glyndon, Minn., on Sunday, May 22, 1977.
1999 - In only his seventh career start behind the wheel of a late model, George Bohn of Machesney Park, Ill., won the 40-lap NASCAR Winston Racing Series feature at Rockford Speedway on May 22. The 34-year-old Bohn led wire to wire in picking up the victory.

1994 - Garrett Slager of Moheka, Ill., scored his first career UMP late model win at Kankakee (Ill.) Speedway on Friday night, May 20 and then followed that up with another win the next night at LaSalle (Ill.) Speedway on May 21. He won both features in dominating style leading green to checker.

1988 - A hard, dusty track proved to be the right combination for 56-year-old Earl Muilenberg of Sparta, Mo., as he grabbed the lead with five laps to go to win the 2nd Annual Coors National Series for IMCA modifieds on Thursday, May 19. John Anderson of Lexington, Ill., had held the lead throughout until a flat tire sidelined him, giving Muilenberg the lead and the win. Dale Plack and Larry Satterfield, both of Brimfield, Ill., took second and third respectively, Wayne Brau of Guernsey, Iowa grabbed fourth and Bob Dominacki of Bettendorf, Iowa rounded out the top-five.