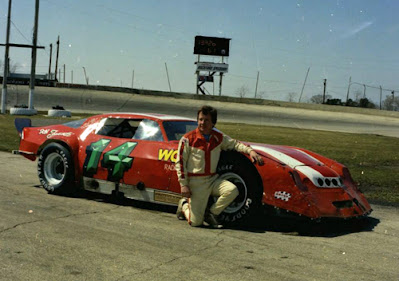 1980 - Don Hobbs of Whiteland, Ind., took the lead on the 90th lap and won the $30,000 National Dirt Racing Association feature at Hawkeye Downs Speedway on Sunday evening, May 11, 1980. Hobbs grabbed the top spot from Loveland, Ohio's Rodney Combs and sailed home the victor in the first-ever NDRA show in the upper Midwest. Tom Helfrich of Haubstadt, Ind., led the first 86 laps before pulling into the pits with mechanical problems.

1975 -"Big" Bob Kelly of Leland, Ill., three-time Sycamore Speedway track champion, won the super late model feature in Sycamore, Ill., on May 10, 1975. Kelly took advantage of multiple cautions to inch towards the front, finally securing the lead and the win.

1968 - Roger Larson of Sioux Falls, S.D., wheeled his #33 to the "A" feature victory as Huset's Speedway opened its 1968 season on Mother's Day, May 12th. Larson finished just inches ahead of Sioux Falls' Larry Lapes as the checkers waved.