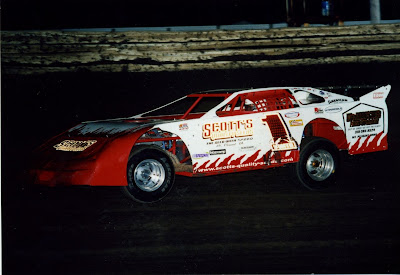 Mike Smith of Jewell, Iowa; 1992 Deery Brothers Summer Series champion
by Lee Ackerman
Omaha, Neb. — 1992 was a unique year in the history of the IMCA Late Model Deery Brothers Summer Series in that it saw the series run 12 races without having a repeat winner. That was quite a contrast from the previous year, which saw multiple race winners during a 16-race schedule. Curt Martin had posted five wins, Rollie Frink three and Jay Johnson two.

The 1992 season kicked off on May 24 at Marshalltown Speedway with Danville, Iowa’s Ron Jackson leading 23 of the 35 laps to take the win. In picking up the win Jackson had to overcome the bad luck, which had plagued him during the first month of the racing season. He had broken in nine of his first 14 races. Early race leader Darrel DeFrance was forced to the pits on lap 12 with a broken axle. Another veteran Ed Sanger challenged Jackson through the later stages of the race and lead once but ended up settling for second.

On June 3, the series moved west to the Audubon (Iowa) County Speedway where Omaha’s Joe Kosiski passed early race leader Mike Smith for the lead after a lap 18 caution bunched up the field and took away Smith’s sizeable advantage. 1991 IMCA Late Model National Champion Jeff French pressured Kosiski throughout the later part of the race, but was forced to settle for second. Smith would finish 16th.

On June 10 at the Southern Iowa Speedway in Oskaloosa, Iowa, Mike Smith of Jewell, Iowa made up for his Audubon misfortune by passing early race leader Bruce Hanford on lap 18 and used a good run on the low side of the track to pick up the win. Marshalltown winner Ron Jackson was coming on strong at the end but ran out of time and had to settle for second.

Frank Shickel Jr. of Bloomington, Ill., added his name to the list of Deery Brothers feature winners by picking up the win at the East Moline (Ill.) Speedway. Steve Lance took the early lead until lap eight when Greg Kastli passed him. On lap 22 Shickel followed Lance and Mike Smith by Kastli and five laps later moved into the lead and came away with the victory. Gary Webb put on perhaps the best drive of the night. After staying with leaders early and challenging Kastli for the win, a spin in turn three forced him to go to the rear. For the rest of the race he sliced through traffic and got by Lance in turn four of the final lap for the runner-up spot.

Three nights later on July 8 at 34 Raceway in West Burlington, Iowa, Donnellson’s Kevin Cale decided it was time to add his name to the Deery Brothers records books. Unlike the previous winners, Cale started on the pole and led all 35 laps. He was, however, given a fierce challenge at the end of the race by Ron Jackson, who finished second.

Defending Deery Brothers Champion Curt Martin won the August 5 series event at the Independence Motor Speedway much to the delight of his hometown crowd. Martin battled early race leader Dan Forsyth before assuming the point on lap six. From there, Martin pulled away from the field in a caution-free event. Bryan Wanner finished second.

On July 27, the series made their annual stop at the Iowa State Fairgrounds. Over 40 cars showed up to battle it out. Twenty- nine would start the 50-lap feature on the big 1/2-mile. Gary Webb started on the pole and led all 50 laps, but it was not without some serious challenges. Jeff French was quickly in hot pursuit and the two pulled away from the field and battled it out for the first 48 laps. A caution with two to go made it a three-car shoot-out between Webb, French and Mike Smith. On the restart Smith dove low and mounted a serious challenge, but Webb responded to the challenge coming off two and pulled away for the win, leaving French and Smith to fight it out for second, with Smith taking the spot.

Next came the late model portion of the IMCA “Super Nationals” at the Boone Speedway. Darrel DeFrance took the early lead, but not without a fight from Jeff French. On lap 18 Rick Wendling passed French for second and would battle it out with DeFrance over the final 10 laps of the race, with DeFrance holding on for the win and Wendling coming home second.

The next night, September 5, the series headed back to Independence for round nine of the series. Craig Jacobs of Des Moines took the early lead in a race that saw three cautions in the first four laps. Things settled down and Boone McLaughlin joined Jacobs and the two pulled away from the field. Near the races end Jacobs extended his lead and took the checkers with McLaughlin in second.

On September 12 the series made its first stop ever at the Adams County Speedway in Corning, Iowa. Fifty-two cars signed into the event with 28 starting the feature. Bryan Wanner had things in hand for the first half of the race but then Omaha’s Ed Kosiski, who had been on fire all year at Corning, came charging from his seventh row starting position and grabbed the lead, bringing Jeff French with him. The two battled it out for the remainder of the 40-lap feature with Kosiski taking the win and French finishing second.

The series made its second stop of the season at 34 Raceway on September 19 and saw yet another winner. Bryan Wanner took the lead from Jeff Laue on lap 29 and went on to win his first-ever Deery Brothers feature. Terry Schlipman also got around Laue and battled Wanner the last seven laps for the win but had to settle for second.

The season finale for the series came on October 2 with a return visit to Boone. Mike Smith held a 14-point lead over Ron Jackson in the points battle. Jeff Aikey grabbed the early lead but was passed by Kevin Pittman early in the race for the top spot. Pittman would hold on for the win despite being challenged in the later stages of the race by a hard-charging Ron Jackson. Jackson would come home in second place. Mike Smith would finish fifth.

After 12 races with 12 different winners Mike Smith would be crowned the 1992 Deery Brothers Champion. Smith finished with 324 points to Jackson’s 316. It would be the only year in the history of the IMCA Late Model Deery Brothers Summer Series in which there was not a repeat winner.