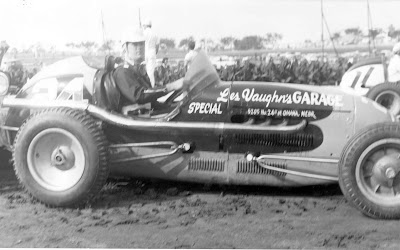 by Lee Ackerman
Omaha, Neb. - Omaha native Les Vaughn got involved in racing in 1948 at Playland Park in Council Bluffs, Iowa. Vaughn had a wrecker service (Les also owned a van and storage business) and started providing wrecker services at the races at Playland. Before long, he was hooked and built a 1940 Ford coupe to race. By 1957, Vaughn had a stable of eight race cars, two each for Modified Stocks, Midgets, Sprint Cars and Three-Quarter Midgets. Over time, some of the best local drivers found themselves behind the wheel of Vaughn’s cars. Names like Bob Parker, Carl Lillenthal, Porky Rachwitz and Tiny Lund.


For several years Les raced his midgets throughout the Midwest at such tracks as Olympic Stadium in Kansas City, Riverview Park in Sioux City and Playland Park in Council Bluffs. Midget racing started to fall out of grace in the ’50s, and Les turned more and more to Sprint Cars. In 1953, he bought a Big Car that had tried to qualify at Indy, but had a limited amount of success because the car simply overpowered the tracks.


In 1955, Vaughn bought an Offy with a smaller engine, which was more suited for the dirt tracks he was running on. He also started painting his cars black and pink, with his No. 24 in silver on the side. Vaughn claimed that the bright pink and silver made his cars easier to keep track of on dusty fairgrounds race tracks. Vaughn’s Offy became one of the better cars competing in the International Motor Contest Association Series.


In early August 1956, at the North Dakota State Fair in Minot, Vaughn ran into a 21-year-old midget driver from Houston, that was chomping at the bit to get a Sprint Car ride. Vaughn already had a driver and so the kid talked legendary car owner Dizz Wilson into letting him take one of his cars out for warm-ups. Wilson cautioned the kid to take it easy, but when the green flag flew for hot laps, the kid immediately floored the gas and with each passing lap, the kid went faster and faster, passing cars, high, low and anywhere on the track he could. Wilson was terrified, as he saw an out-of-control kid and when the kid pulled into the pits, Wilson screamed at the kid to get out of the car. He made it clear to the kid, that if he ever did land a ride, that neither he nor his car would last one afternoon.


Les Vaughn saw something else. He saw car control and a tremendous confidence and it wasn’t long and the kid was driving the Les Vaughn Offy. On August 24, 1956, the kid from Texas set the IMCA regulars on their ears. As the IMCA yearbook for that year states, “A.J. Foyt, 21-year-old Houston driver, startled Minnesota State Fair officials by setting fast time in big car trials. He grabbed the pole spot from 42 other qualifiers with a time of 23.54 seconds.” The next day at the Red River Fair in Fargo, N.D., Foyt ran away with the feature and scored his first IMCA Sprint Car feature win. On August 29, back at the Minnesota State Fair he finished third in a stellar field of cars.


A.J. Foyt would leave for the United States Auto Club in 1957, and a career that is perhaps unequaled in American racing, but before he did, he would put on, one more incredible driving exhibition behind the wheel of the Les Vaughn Offy. On June 16, at the high-banked asphalt track at Salem, Ind., Foyt set second quick time and then drove the Vaughn Offy around the asphalt circuit in dirt tracking, tire smoking fashion. In a battle with Bob Cleberg, Foyt traded the lead with Cleberg four times before pulling off the win. Les Vaughn would rank this as his biggest win ever. The IMCA yearbook covering 1957 made the following comment about the races at Salem, “IMCA drivers did what others said was impossible on the high banks and started all preliminary events from inverted starts.”


The Les Vaughn Offy has long disappeared from the racing scene. In late 1960, while at an IMCA race in Oklahoma City, Vaughn suffered a mild heart attack, and the doctors told him his traveling days were over. Les Vaughn would pass away in February 1961. As for the young kid from Texas, in 2007 he celebrated 50 years in Indy Car racing and his name has become synonymous with Indy Car racing, the Indianapolis 500, and winning in any type of car, anywhere. Every race fan has his own opinion about who was the greatest driver in the history of American Motor Sports, I have no doubt who gets my vote.


One of my favorite races of all time was the 1977 Indianapolis 500 when driving a car built by himself and his dad in their Houston shops, called a Coyote, A.J. Foyt became the first four-time winner of the greatest spectacle in racing. To me, that will always be one of the greatest moments in American Motor Sports.


I also remember French sports car driver Bob Wollek questioning what the GREAT A.J. FOYT was doing on his team for the 24 hours of Daytona. In the dark early morning hours and driving in the rain, A.J. Foyt set the fastest time of the race as the team went on to win the 24 hours of Daytona. The stories about that young kid from Texas are endless, books have been written about his exploits. I think it's save to say that there will never be another one quite like him.


In 2000, Les Vaughn was inducted into the Nebraska Auto Racing Hall of Fame. As for the Foyt kid, well I have heard he has been inducted into a few Halls of Fame himself.