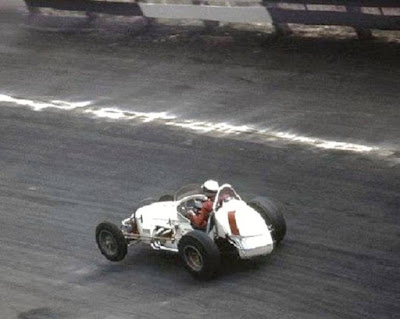 Michigan's Johnny White led start to finish at Winchester.
Winchester, Ind. (June 23, 1963) – Johnny White proved he is “King of the High Banks” in IMCA as he took his third straight feature win on Sunday afternoon on the famous high-banked half-mile Winchester Speedway.
White, starting on the outside of the front row alongside Red Amick, shot his Weinberger Homes Chevrolet ahead of Amick’s Fetter Aluminum Chevy in the first turn and was never headed.
Running smoothly the entire 30 laps, White took over 30 seconds off Bob King’s record set exactly one year ago. White’s time was 9 minutes and 17 seconds - a new IMCA record but it did not erase the 30-lap record held by USAC star Roger McCluskey of 9 minutes and 14 seconds.
Amick was able to keep his sights on White as he finished second in his second outing since coming out of a two-year retirement. Coming up from his sixth starting position was Norman Brown as Gordon Woolley came from eighth to finish fourth. Jim McCune rounded out the top five finishers.
Amick topped the 30-car field in qualifications with an 18.06 second lap. White spun on his first qualifying lap but came back with an 18.07 clocking on the second lap as 14 cars topped the 18-second bracket.
Bob Coulter was the busiest driver during qualifying as he first took the Altfater Offy only to blow a rod through the side, then the Altfater Chevy lost oil pressure for him and he ended up in Speedy Helm’s Chevy to make the show.
A crowd of over 4,500 saw a good safe show as the yellow flags weren’t needed as the only spins were both by White, in warmups and qualifying.