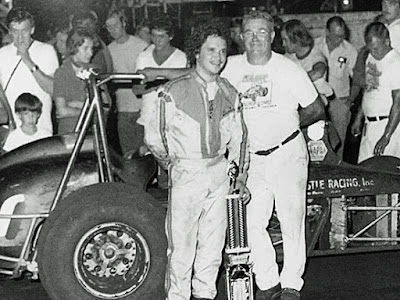 Cedar Rapids, Iowa (June 18, 1978) – Shane Carson of Oklahoma City, Okla., driving the Bob Trostle Chevy, almost made a clean sweep of all events he entered at Hawkeye Downs Speedway on Sunday evening.
Carson set fast time of 22.05 seconds, won the second heat and the 20-lap feature event.
He had to eat dirt, however, from Sonny Smyser’s spinning wheels in the fast car dash, and for the first 14 laps of the feature event before he succeeded in getting past Smyser and his Springer-Chevy. Smyser, from Lancaster, Mo., would settle for second behind Carson.
A fierce battle took place for the entire 20 laps for third-place money as a blanket could have covered Randy Smith of Norwalk, Iowa, Jerry Blundy of Dahinda, Ill., and Eddie Leavitt of Kearney, Mo. Leavitt would just barely nip Smith by the length of a tire at the checkers.