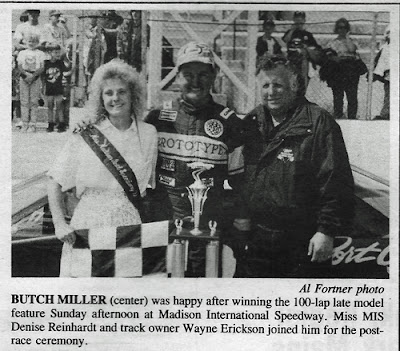 Oregon, Wis. (June 21, 1992) - Butch Miller borrowed a driving suit from one driver, and a helmet from another, but the racing style was all his own.

The Lawton, Mich., native roared back from a big deficit to defeat Robbie Reiser and win the Capital 100 super late-model stock-car race at the half-mile Madison International Speedway Sunday.


Reiser had overtaken Steve Carlson on lap 5 and charged to a huge lead - a half-lap by the midway point - but Miller passed Reiser coming out of turn four on lap 98 to gain the victory before, an estimated crowd of 4,200.


“I knew Butch was going to come sooner or later,” said Allenton’s Reiser. “The fast guys come through.”


And there was no doubt who the fast drivers were. Only five drivers finished on the lead lap as Reiser and Miller overwhelmed the field.


Reiser started from the fourth spot and Miller moved up the field from 10th. Taking over second place on lap 52, Miller began to slowly chip away at Reiser’s advantage.


“I didn’t think he’d keep streaking away like he was doing, but he sure did,” said Miller, a National Association for Stock Car Auto Racing Busch Grand National driver.


Miller actually passed Reiser on lap 97, but the only yellow flag of the race flew, and the standings reverted to the last completed lap, 96, which put Reiser back in front for the restart. Miller figured it would be difficult to pass Reiser again.


But Miller squeezed through on the inside and shut the door on Reiser.


“He’s a tough customer,” Reiser said. “Today, we were just trying to cool the tires, stay out of trouble and drive smooth laps. Butch was just a little faster.”


“I was surprised he came back,” said Shear of Miller. “I knew Butch was running good, but not that good.”


Miller raced in the Carolina Pride-Budweiser 250 Busch Grand National race in Myrtle Beach, S.C., Saturday and finished a disappointing 16th. His helmet and driving suit were shipped with his other car, forcing Miller to use Jeff Neal's suit and Tony Strupp’s helmet.


There was no problem, however, regarding the car.


“The car was really good, I might have been a little too cautious at the beginning. This is a really good car.”


Not everyone enjoyed success. Driving in the car of Sun Prairie’s Scott Ollerman, Edgerton native Rich Bickle Jr. bowed out with ignition trouble on lap 50. And American Speed Association point’s leader Scott Hansen, of Green Bay, could not race because he crashed during the Berlin 200 in Grand Rapids, Mich., Saturday, sustaining a broken leg and ribs.