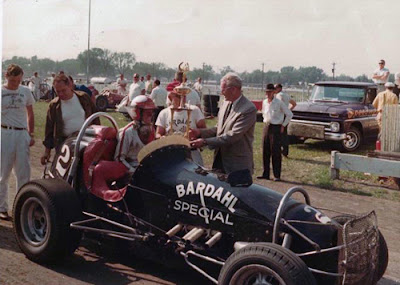 Des Moines, Iowa (June 4, 1967) – Jim Moughan of Springfield, Ill., handled the Hector Honore “Black Deuce” perfectly on a hard-slick track to win the 30-lap 14th annual Hawkeye Futurity at the Iowa State Fairgrounds on Sunday afternoon.
After two restarts of the feature race, Moughan took the lead in turn one and never let up to make it one of the greatest comebacks in recent International Motor Contests Association history.
The Honore Chevy was very nearly scratched for the day when a wheel popped off the car during time trials. Honore and his crew put the rig back together in time for the Illinois charger to win the consolation race. With second fastest time recorded moments before the tire went haywire, Moughan was sitting pretty for the feature.
He was never in any serous trouble, although Jerry Blundy of Galesburg, Ill., the 1966 Hawkeye Futurity champion, kept it close for the 15-mile race.
It just seemed to be Honore’s day as earlier he was honored by National Speedways, Inc., and president Al Sweeney for his years of successful racing with IMCA. The “Black Deuce” has owned most all IMCA’s speed records in the sprint car division.
Following Moughan and Blundy to the finish were Ray Lee Goodwin of Kansas City, Mo., Tom Corbin of Carrollton, Mo., and Lee Kunzman of Guttenberg, Iowa. Fast qualifier Tom Custer of Rock Island, Ill., pulled to the pit area with engine failure on lap 19.