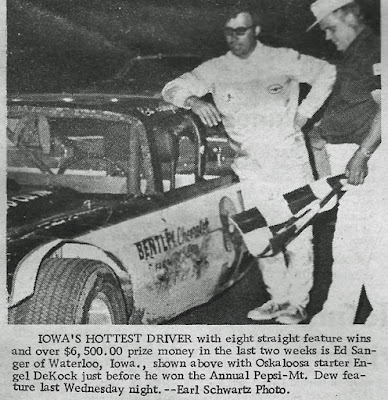 Oskaloosa, Iowa (June 9, 1976) – Ed Sanger of Waterloo, Iowa, collected the $1,000 first-place money in the late model super stock second annual Pepsi-Mountain Dew Special at the Mahaska County Fairgrounds on Wednesday night.
Sanger started on the front row alongside Curt Hansen of Dike, Iowa. Hansen took the initial lead and led the first two laps before Sanger made his move. Sanger would spend the next 48 circuits fighting off multiple challenges by Hansen before taking the checkered flag.
The win at Oskaloosa would mark Sanger’s sixth win in the last eight days of racing. The win streak started a week ago on the very same track.
Hansen would settle for runner-up honors while Duane Steffe of Colona, Ill., moved his way through the field to take third. Breathing down Steffe’s neck most of the way was Joe Merryfield of Des Moines until lap 44, when “Injun Joe” was forced to pit with a left front smoking wheel. Bill Beckman of Lisbon, Iowa, would finish fourth followed by Darrel Dake of Cedar Rapids, Iowa.
Hansen set the fastest time of the 39 entries, with a 24.06 second mark on the big half-mile. He would also capture the trophy dash.
Bill Zwanziger of Waterloo, Iowa, captured the first heat, Jerry Wancewicz of Omaha, making his first-ever appearance at the speedway, captured the second heat and consolation event. Glen Martin of Independence, Iowa, scored the win in the third heat and Dick Schiltz of Waterloo, Iowa, earned the victory in the fourth heat.