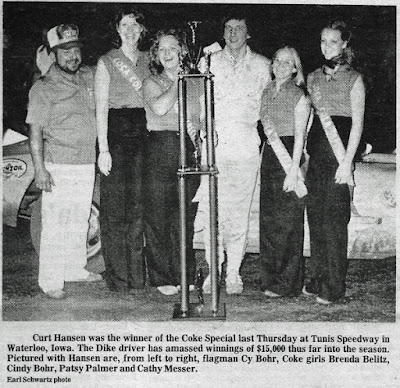 Waterloo, Iowa (June 15, 1978) – Curt Hansen, the defending late model champion at Tunis Speedway, led from start to finish in the second annual Coca-Cola Special on Thursday night.
Hansen earned the pole position for the 40-lap late model main event by winning the first heat under the program’s open competition format. He breezed to victory in that 10-lap race after starting on the outside front row.
The Dike, Iowa, driver quickly served notice in the feature too. He pulled away from the rest of the field and gained a comfortable margin between himself and his opposition.
Hansen, who drives an Ed Sanger built Camaro, earned $1,000 in prize money including the $750 first place money, $200 for leading all 40 laps and an additional $50 for winning the first heat. It was his first victory of the season at the 3/8-mile dirt oval.
Gary Crawford of Independence, Iowa, worked his way up second place in the feature after starting fifth while Waterloo, Iowa, veteran Bill Zwanziger won a dog fight for third.
Des Moines, Iowa, pilot Bill Rice was fourth and Tom Bartholomew of Waterloo, Iowa, rounded out the top five finishers.
Leon Plank of Eau Claire, Wis., and Bob Hilmer of Dysart, Iowa, also won heat races while Joe Merryfield of Des Moines took the consolation.
Gene Ehlers of Independence, Iowa, wrestled the lead from Larry Schmidt of New Hampton, Iowa, on the very last lap to win the 25-lap sportsman main.