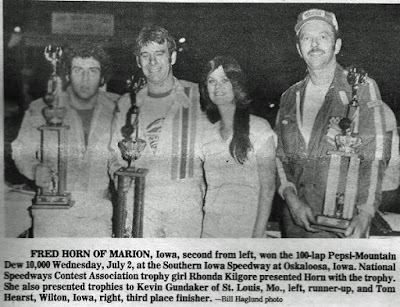 Oskaloosa, Iowa (July 2, 1980) – Fred Horn of Marion, Iowa, accomplished the unheard of on Wednesday night at the Southern Iowa Fairgrounds as he lapped the entire field to win the “Pepsi 10,000”.
The unbelievable feat was even more astonishing considering the quality of cars and their drivers. Many of the best late model pilots in the Midwest comprised the 27-car field that took the green for the 100-lap event, the last 51 laps run under green.
Twenty laps after the final caution went off on the track, Horn had a nine-second lead over Kevin Gundaker of St. Louis, Mo. Five laps later, that lead was paddled to 11 second, and another 10 laps later Horn’s advantage was 16 seconds.
By lap 89, Horn was right on the heels of a three-car battle for second place between Gundaker, Joe Kosiski of Omaha, Neb. and Tom Hearst of Wilton, Iowa.
Horn flew past both Hearst and Kosiski on lap 94 and then went around Gundaker three laps later to complete his performance.
It was the second time out for Horn in the car he had recently purchased from Rodney Combs of Lost Creek, W.Va.
Finishing 99 laps and rounding out the top five were Gundaker, Hearst, Kosiski and Dick Schiltz of Waterloo, Iowa. Sixth was Ed Sanger of Waterloo, Iowa and seventh was Bill Breuer of Wapello, Iowa, each with 97 laps completed.
National Speedways Contest Association official Dave Van Patten said it was the first time he could recall a driver lapping the entire field.
Gundaker set fast time for the evening and again lowered his own track record on the fast half-mile. It was Gundaker’s third appearance at the track aand it was his third straight record-breaking qualifying run. Wednesday, he toured the track in 22.060 seconds, lowering his mark from 22.13 seconds.
The top 20 cars in time automatically qualified for the 100-lap main event. A last chance race was held for the 17 cars who did not qualify and the top four from that race were slated to start at the rear of the field.
However, things didn’t quite work out that way…
On the final turn of the final lap, the lead four cars – Craig Jacobs of Des Moines, Bill Rice of Des Moines, Ron Jackson of Burlington and Ron Boyse off Kalona, Iowa – collided and spun on the race track. Boyse was able to get past the melee and came across the finish line followed by Chuck Anderson of LeGrand, Iowa, Bill Breuer and Charlie Moubry of Novelty, Mo.
After discussing the situation, NSCA officials decided to add the top four as they ran on the white flag lap, plus the top four to cross the finish line. Since Boyse figured in both, seven cars were added to the rear of the field. It paid for both Breuer, who started 26th and finished seventh and Moubry, who started 27th and finished eighth.
Mike Niffenegger of Kalona, Iowa, led the first seven laps of the feature before he spun and crashed in turn four. Horn inherited the lead for good.