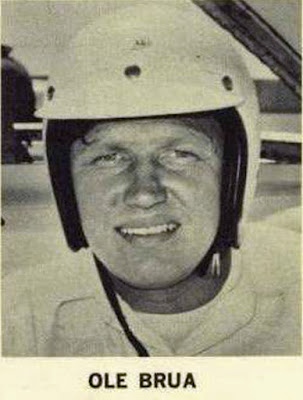 
Carl Vander Wal of Ames grabbed his third consecutive sportsman win before 4,473 race fans, the largest crowd of the season.


Brua, who started in the second row with a 1968 Ford Fairlane, took the lead on the very first lap and dashed away from the rest of the field. Darrel Dake of Cedar Rapids took second, Verlin Eaker of Mechanicsville claimed third and Tom Hughes, Monticello, grabbed the fourth spot.


By the time Dake had taken the second spot 10 laps in, Brua had a quarter-lap lead and he maintained that margin to the end.


In the sportsman main event, Vander Wal started 12th in the 13-car field and powered his 1956 Chevrolet to an easy victory. Roger McWilliams of Des Moines finished second.


Lee Pinckney of Des Moines was involved in a spectacular crash in the sportsman first heat. His 1957 Chevrolet rolled six times, and then smashed into a concrete wall. Pinckney walked away unhurt.


Lem Blankenship of Keokuk, Iowa, hit a loose wheel sending his car into the backstretch wall. He too, was unhurt.