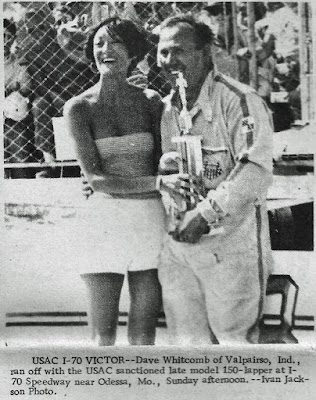 Odessa, Mo. (June 13, 1976) – Dave Whitcomb of Valparaiso, Ind., drove a strong, steady race and piloted his 1975 Camaro to victory lane in I-70 Speedway’s “Show Me 150”, a United States Auto Club sanctioned stock car race on Sunday afternoon.
The 44-year-old USAC veteran and father of four took over the lead on lap 61 from four-time USAC champion Butch Hartman of South Zanesville, Ohio.
Hartman would spin on lap 74 and crash into the wall on the backstretch. His car would burst into flames, but he was not hurt. The car, however, was too badly damaged to continue.
Larry Phillips of Springfield, Mo., the I-70 Speedway 1975 late model stock car champion, put on a strong performance early on in the race but became a victim to the extreme heat and turned over the wheel to his Camaro to Jerry Sifford, who finished fourth.
Ramo Stott of Keokuk, Iowa, the 1975 USAC national stock car champion, finished second in the race followed by Terry Ryan of Davenport, Iowa. Harold Fair of Lavonia, Mich., rounded out the top five.
The accident involving Hartman brought out the yellow flag for laps 74 to 84 and was the only time the yellow was displayed for the race.
The trophy dash was won by Stott and the semi-feature went to Harold Fair. Butch Hartman set fast time during qualifying, touring the half-mile in 19.36 seconds.