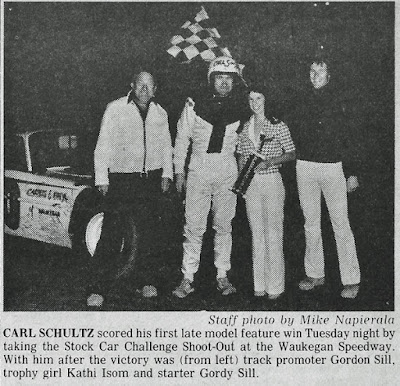 Waukegan, Ill. (June 12, 1979) – Carl Schultz of Pewaukee, Wis., led from start to finish in the 50-lap Midwest Late Model Stock Car Challenge Shootout at Waukegan Speedway on Tuesday night.
Schultz appeared to adjust himself to the track rather quickly as he took the fourth heat race before moving on to the feature. Schultz set a 10-lap record of 2 minutes and 50 seconds, eclipsing the previous record mark of 2 minutes and 53 seconds set on June 24, 1978.
The “King of Clay” Tony Izzo also shattered a record by taking fast time with a 16.12 second lap. His mark was more than a second quicker than the previous mark of 17.14 seconds set by Jim Cossman of Waukegan, on September 24, 1966.
Izo attempted to overtake Schultz in the latter stages of the main event. However, the Wisconsinite rose to the occasion and held off the crafty veteran to take the win.
Heat winner Mike Melius came in third, with LeRoy Schneiderman fourth, John Provenzano fifth and trophy dash winner Bill Strom sixth.
Lloyd Griffith won the semi-feature over Melius, Mark Warner and Dennis Erb.