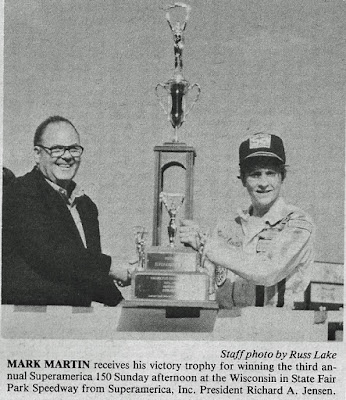 West Allis, Wis. (May 1, 1980) – Things almost went too smoothly for Mark Martin during his victory in Sunday’s third annual Superamerica 150-mile American Speed Association Circuit of Champions late model stock car race at Wisconsin State Fair Park Speedway.
Thanks to a quicker than expected tire change on lap 73, Martin was forced to make another pit stop for fuel 15 miles later and when he returned to the track, the defending and two-time division driving king found 24 cars between himself and race leader Alan Kulwicki.
However, despite three late caution periods, Martin guided his Camaro through the pack to take the lead from Dick Trickle on lap 137 and went on to record his second ASA victory of the year.
For his efforts the Batesville, Ark., native pocketed $6,000 of a record $40,000 purse, contributed to by a crowd of 15,096.
Mike Miller, who placed second to Trickle in last year’s Superamerica 150, passed four opponents in the final eight miles to finish second, two seconds behind Martin.
Bob Senneker passed Trickle with less than two laps remaining to take third, while Trickle settled for fourth, ahead of Bob Strait, Dave Watson and Mike Eddy. The top 13 finishers all completed the event’s full 150-mile distance.
Martin started the weekend by shattering Randy Sweet’s year-old track qualifying record of 31.217 seconds (115.322 mph) with a 30.476 second (118.125 mph) tour of the one-mile paved oval on Saturday, to earn thee pole starting berth for Sunday’s race.