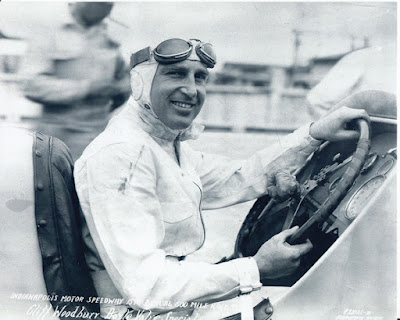 Cliff Woodbury at Indianapolis in 1927

By Gary Sharp
Alton, Ill. (May 28, 1984) – Life is a bit slower now, but Memorial Day still ha special memories of speed for 89-year-old Cliff Woodbury who got a taste of both victory and near-disaster in four years of racing in the 1920-era brick track of the Indianapolis 500.

Woodbury placed third a “The Brickyard: - as Indianapolis Speedway was known – in 1926, the first year he entered the legendary Indianapolis 500. In 1929 – his last Indy 500 and his last year of competitive racing – he won the pole position with the best qualifying speed, 120.599 miles per hour, but crashed on the third lap, “creating a wonderful big pile of wreckage for ‘em”.

Until about a year ago, when he came to Godfrey, Ill., to live the youngest of his four daughters, Theresa, and her husband, Edmund Morrissey, Woodbury lived in LaGrange Park. For some 53 years, until retiring in 1973, he operated Woodbury Brothers Garage in Chicago with his brother, Elmer.

Woodbury’s fascination with autos started early. He paid $50 in cash earned by cutting grass for driving lessons and in 1915, even before he married his late wife, Sarah, he bought his first car and won first place in a race on a dirt track in Davenport, Iowa. In 1927, when dirt track racing was recognized by the American Automobile Association (AAA), he became the National Dirt Track Champion.

Woodbury retired from competitive racing after a second accident in 1929 on the banked board speedway at Altoona, Pa. A car in front of him hit the guard rail, scattering steel on the track. “I came along and ran into the debris,” Woodbury remembers. “The car was in a fair way to disintegrate.”

Woodbury’s car hit the debris, flipping end over end. First radio reports said he had been killed along with another driver; though he survived the crash, he was hospitalized for some two months and full recovery took several years. 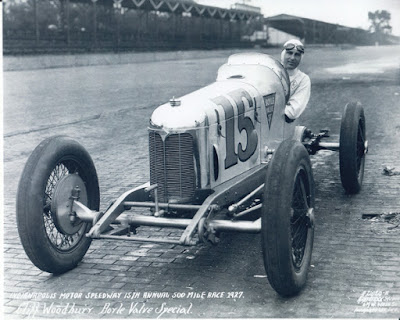 Cliff Woodbury in his Boyle Valve Special in 1927.


Accounts of Woodbury’s career in the reckless daredevil days of racing note his “skill and daring” on all sorts of tracks, including dirt, board and brick, and his penchant for record setting. On one afternoon in 1924 he set a new world’s record at Crown Point, Ind., completing a half-mile lap in 27.2 seconds, then went on to win a 10-mile race in the world record time of 9 minutes and 38 seconds. In 1926, driving a banked board track in Culver City, Calif., he averaged 138 miles per hour during warm-up, setting a track record and was flagged off the track by over-cautious officials.

The tales off his racing exploits are the stuff of legend – from his 1924 defeat of racing great Stan Nowicki at the State Fairgrounds in Milwaukee to his 1926 loss in Detroit to Frank Lockhart in a 100-mile race.

“Lockhart ran the entire distance without a pit stop,” Illustrated Speedway News observed in 1948,” while Woodbury made SIX STOPS with a leaky radiator, lost at least seven laps and still only lost the race by one lap.”

While some of his Indy memories are dimmed by the passage of almost 60 years, Woodbury’s eyes still shine when he talks about his glory days of racing and he still has a sense of humor about that “wonderful big pile of wreckage.”

The brick Indy track was “quite rough,” Woodbury says, probably with some understatement. “We had to put up with it, because that was it.”

Dirt tracks weren’t much better, “That’s all there was when I got my first pair of goggles,” he says. “You learn to do the best you can with what you’ve got.”

Leafing through photo of himself in cars, surrounded by assistants and spectators, Woodbury picks out the faces of his mechanics. “He made $50 a week plus 10% of my winnings. That’s a precarious way to make a living, but he did it.”

Woodbury always remembers his small scale start as a mechanic. “I had a box of tools so I kind of developed a little shop of my own to work on automobiles. After a few years of that kind of work, I got a few of these race cars. I made enough money chasing these things around that I was able to get into it myself.” 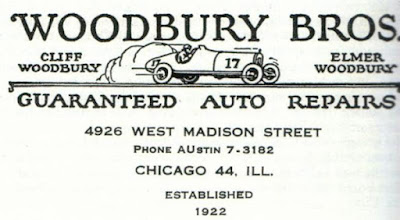 
While he financed his first cars and earlier races himself, Woodbury later obtained the sponsorship of Mike Boyle’s Boyle Valve Company in Chicago. It was a Boyle Valve Special – a Miller Straight 8 – that Woodbury roared to a third-place finish in the 1926 Indy 500.

Woodbury modified one of his cars, a Frontenac, rebuilding it without the transmission and differential. As a result, the car ran in only one gear – fast forward. Such adaptations later became common, but were innovative in the days when Woodbury’s Frontenac had to be pushed to get it started but finished far ahead of its competitors. “On the dirt tracks, it was a bear,” Woodbury recalled.

Cliff Woodbury returned to Indy in 1975 to race one of those ancient cars in an Old Timers race. According to reports of that race, Woodbury whizzed around the track at some 90 miles per hour with son-in-law Tom Culligan hanging on for dear life – the old cars weren’t equipped with seat belts. Thankfully for the passenger, it finally quit running.

According to Bob Laycock, the Indianapolis Speedway historian, there are some veterans of Indy, including Colonel Edward Towers, who was in the 1911 race. But Towers was a “riding mechanic” and Woodbury, Laycock says, is probably the oldest living driver who started an Indy race.

Woodbury still watches the Indy 500 on television, but he’s sure the sport was “more exciting back then. You didn’t have a load of safety built into them.” And he notes, “After I left the brick track, they turned it into a modern track.”

The Woodbury legend still fascinates his family of five children, three daughters besides Mrs. Morrissey and a son, Cliff Jr; 38 grandchildren, including 11 Morrissey’s; and 42 great-grandchildren.

One grandson, Patrick Culligan, turned his grandfather’s saga into an English term paper titled One Man’s Indy 500. “The Memorial Day classic still attracts hundreds of thousands of people to the Indianapolis Motor Speedway and amateurs still dream of the big time,” the grandson wrote. “Only those who experienced the excitement and the danger of the Indy 500 really know what it’s all about.”