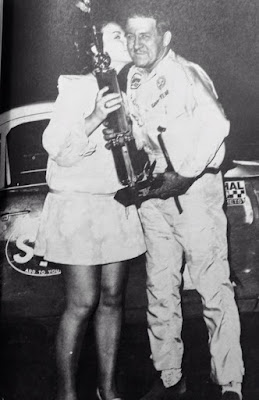 Ernie Derr receives the spoils of victory after his win in Oklahoma City
Oklahoma City, Okla. (May 31, 1970) – Well on his way to his sixth straight International Motor Contest Association national title, ageless Ernie Derr shaved 18 seconds off the world 12-lap record in his heat race and went on to capture the 100-lap feature in the IMCA Stock Car race at Fairgrounds Speedway on Sunday night.
The 48-year-old Derr, winner of 10 IMCA national championships and over 275 feature wins, was unchallenged in his heat and lapped but two drivers in the feature event while setting an unbelievable pace in the day’s activities.
He finished his 12-lap heat race in 5 minute and 11 seconds, considerably less than the world record set by Bob Kosiskie in Minneapolis in 1960.
He also set a track qualifying record on the half-mile oval with a clocking of 24.89 seconds. The old mark was 25.03 set by Ramo Stott in 1968.
Only 14 drivers competed in Sunday’s show but the performance of Derr was enough to satisfy the more than 3,000 race fans.
Derr’s only disappointment was in the 10-lap trophy dash. After sliding out on the last turn on lap 6, Derr lost his hold on second place and finished last. The trophy dash was won by Irv Janey of Cedar Rapids, Iowa, who finished second to Derr in the feature.
Janey led during the first five laps of the main event but on the sixth lap Derr caught Janey on the first turn and led the rest of the way.
Midway through the race, Janey was challenged for second by Fred Horn of Marion, Iowa, and the two drivers went bumper to bumper for the next 10 circuits.
Janey finally pulled safely in front of Horn but couldn’t catch Derr, who by then, was leading by almost half a lap.
With about 20 laps to go Derr threatened to overtake Horn, which would have made Janey the only driver he had not lapped. At the finish, Derr trailed Horn by only a few feet.
It was the 16th feature win in the last 17 races for Derr, who had a streak of 15 broken by Horn Saturday night in Topeka. Derr finished fourth in that race but wasn’t even challenged by Horn on Sunday.