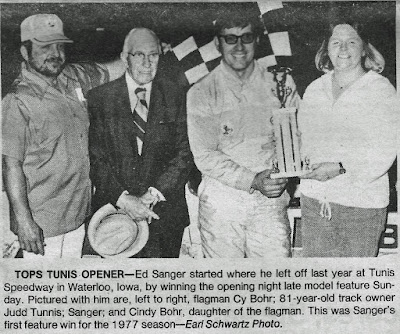 Waterloo, Iowa (May 7, 1977) – Ed Sanger’s initial late model feature win came in the season opener at Tunis Speedway on Sunday night.
Sanger held off a late charge by new teammate Curt Hansen of Dike, Iowa, to take the checkered flag and the top prize of $575. The late model feature usually pays $525 but Aikey Salvage of Cedar Falls, Iowa, kicked in an extra $50.
Four restarts during the course of the 25-lap main event kept cutting the size of Sanger’s lead, and the defending track champion couldn’t shake Hansen.
A red flag on lap 19 allowed the field to catch up with Sanger for a final restart, but the Waterloo, Iowa, veteran pulled away in the final circuits to seal the win.
Hansen, despite a last-ditch effort to pass Sanger, settled for runner-up honors, Red Dralle of Evansdale, Iowa, placed third, with Stan Stover of Reinbeck, Iowa, fourth and Emory Fretheim of Decorah, Iowa, in fifth.
Usually, Tunis Speedway’s feature order is determined by an inverted point standings format, but since this was the season opener, drivers drew for heat positions.
Sanger's victory in the third heat gave him a starting position in the second row for the feature. Gary Crawford of Independence and Stan Stover also won heat races, thus, putting those drivers on the front row for the 25-lapper. Tom Bartholomew of Waterloo, Iowa, won the 15-lap semi-main.
Dan Lake of Washburn, Iowa, was the sportsman feature winner. Lake passed John Weers of Readlyn, Iowa, with only two laps to go to take the victory.
Dick See of Independence, Iowa, won the 10-lap roadrunner race which featured only eight cars.