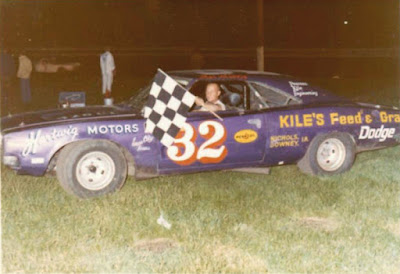 The first six cars were so close during the main you could put a blanket over them as the cars were averaging around 84 miles per hour around the fast half-mile oval.


With Morris of West Liberty and West of West Chester finishing in the first and second places, it was John Moss of Riverside in third spot. Following them across the finish line were Ron Hemsted of Lone Tree, George Barton of Ankeny, Stan Stover of Reinbeck, Dan Hoffman of Des Moines and Phil Reese of Des Moines.


The super stocks registered an average of over 84 miles per hour in the first eight-lap heat. It was a bumper to bumper finish with Pokey West, the victor. Next came George Barton, John Moss and Bill Martin of Council Bluffs.


Joel Rasmussen of Ames took starter Jack Thompson’s checkered flag to win the third and final heat race of the evening. Pokey West passed Larry Embrey on the last lap to finish second. Bob Helm was third and Embrey from Grimes was fourth.


The race fans were treated to some fast and furious racing during the six-lap Australian Pursuit. George Barton and Mel Morris were side by side so often it looked as though they were hooked together. Barton managed to hold Morris off until the last lap when Morris sped by him, thereby eliminating Barton to win the race. Ron Hemsted was second and Pokey West third.


Ron Perdock won the 10-lap semi-main by a comfortable margin over Phil Reese. Alan Jones of Ainsworth placed third in his first time on the Oskaloosa track this season.