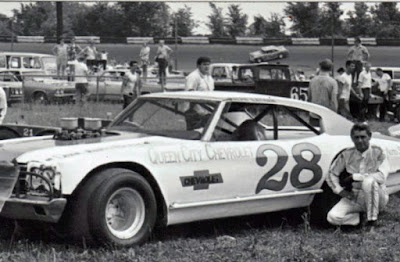 Ralph Latham
Winchester, Ind. (April 30, 1972) – Ralph Latham made the return of Automobile Racing Club of America (ARCA) new cars to the Winchester Speedway on Sunday afternoon a fast and exciting one as he won the 100-lap feature before a slim crowd of 2,500.
The race was the first for ARCA at Winchester since 1964.
Latham, from Cincinnati, Ohio, wheeled his gold and white 1972 Monte Carlo to the checkered flag with a three-quarter lap lead over second place finisher Dave Dayton, driving a 1972 Camaro.
It wasn’t all that easy for the popular Latham, however, as he had his hands full with veterans Les Snow and Bobby Watson until minor mishaps eliminated both competitors.
Latham trailed Snow for most of the first 74 laps. The veteran campaigner had the right front tire on his 1970 Dodge shred at the 60-lap mark. Latham had run on Snow’s bumper since the 17th lap and eased around the faltering Dodge on the 75th circuit and was home free.
Three laps later, Watson suddenly dropped from a close third with a broken fan belt after running nose to tail with Latham from the 60th lap.
Neil Sceva was third in a 1969 Ford with Snow hanging on for fourth and Ron Hutcherson, moving from his 12th starting spot to claim fifth.
The yellow flag was out for 10 laps eliminating Latham’s shot at establishing a new ARCA track record for distance. His time of 37 minutes and 42 seconds was more than two minute slower than the existing mark set by Jack Bowsher in ARCA’s last appearance in 1964.
Bowsher’s one lap qualifying record on the high-banked half-mile did fall, however. Snow erased the 20.20 second standard with a lap of 18.79.
Leonard Blanchard was running a strong fifth for most of the first 75 laps before blowing a right rear tire, won the 4-lap trophy dash in 1 minute and 16 seconds, another track record.