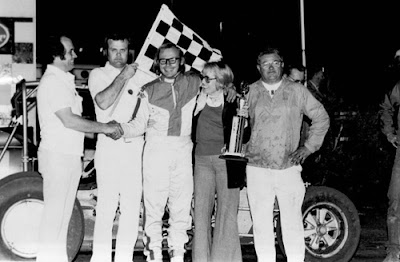 Doug Wolfgang is joined by car owner Bob Trostle after his win at Fairmont Speedway. - Photo courtesy of Todd Kaltved

Fairmont, Minn. (May 14, 1976) – Doug Wolfgang of Des Moines, Iowa, won everything but a lucky number during the sprint car program at Fairmont Speedway on Friday night.

Had the 23-year-old pilot purchased a race program, he probably would have won that also as he scored a clean sweep, winning the trophy dash, heat and 25-lap feature.

Wolfgang’s evening started in the second heat when he put the Trostle-built sprinter into the lead at the start and never looked back, outdistancing Butch Bahr of Grand Island, Neb., by a full straightaway.

The trophy dash was the closest finish of the evening. Bill Mellenberndt of Sioux Falls, S.D. put the “Nashville Club” #97 out front on the first lap and held it until the final turn on the last lap. Coming out of turn four and with the checkered flag in sight, the magneto failed on Mellenberndt’s car and he went abruptly powerless. Wolfgang, who had been running a strong second, dipped low on the inside and sped past for the lead and the win.

In the main event Wolfgang would start 13th, survive a first-lap tangle with Bob Hansen, grabbed the lead on lap 10, and then proceeded to smoke off the competition.

By lap 22, he had built a half lap lead on the rest of the field when the yellow came out for an accident.

On the restart, he put the Van’s Mobile Homes #18 car to work on the high side of the track and three lap later had an eight-car margin on second-place Barry Kettering of Minneapolis.