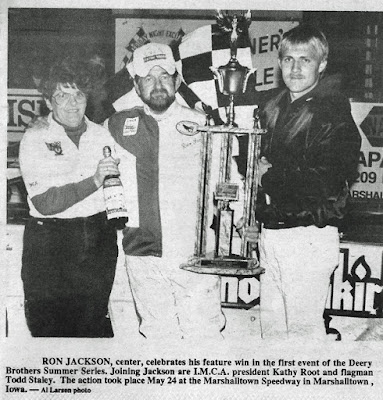 Marshalltown, Iowa (May 24, 1992) – Veteran late model driver Ron Jackson led 23 of 35 laps en route to capturing the first round of the 1992 Deery Brothers Summer Series for IMCA late models Sunday night at Marshalltown Speedway.
Jackson, from Danville, Iowa, hovered in second place behind hometown favorite Darrel DeFrance through the early stages of the race. However, DeFrance broke an axle on lap 12 and was forced to the pits. Jackson then separated himself from the field by as many as 10 car lengths on the high-banked quarter-mile and looked like an easy winner.
But, a caution on lap 20 tightened the field up again, and allowed another veteran, Ed Sanger of Waterloo, Iowa, to battle Jackson at the front. Sanger grabbed the lead once, but was unable to maintain it, and had to settle for second place in the 35-lapper.
A fourth-place finisher in the series’ point standings a year ago, Jackson found the good luck that had eluded him through the first month of the ’92 season.
“We have broken nine of the 14 nights so far this year, so this (win) is a big deal,” Jackson said. About halfway through, I lost a cylinder and was down to seven. I think it was the best thing that could happen.”