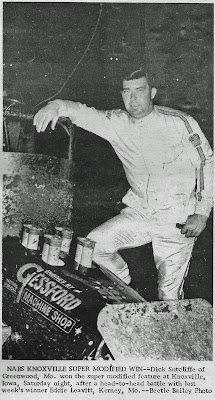 Knoxville, Iowa (May 14, 1973) – Cool weather greeted the Midwest’s top super sprints as they made their second appearance of the ’73 season at the Marion County Fairgrounds on Saturday.
A head-to-head battle was in store for the fans in attendance between Dick Sutcliffe of Greenwood, Mo., and last week’s winner Eddie Leavitt of Kearney, Mo.
Leavitt would jump out to the early lead and it appeared he was well on his way to his second consecutive victory. However, two caution flags for spinouts allowed Sutcliffe to get the jump on Leavitt on the second restart.
Once in the lead, Sutcliffe would run and hide from the rest of the field, lapping all but the top four finishers.
The feature’s two caution flags were brought out first for Roger Larson of Solomon, Kan., who spun in the second turn and clipped the fence. He was uninjured but done for the evening. The second yellow was for Lonnie Jensen of Lincoln, Neb., who spun in the second turn as well and was sidelined for the remainder of the event.
Roger Larson would be fast qualifier in time trials, touring the half-mile in 21.21 seconds. Larson, Sutcliffe and Darry Dawley of Sioux Falls, S.D., were heat winners. Lonnie Jensen won the trophy dash and Bob Fisher of Mount Vernon, Ill., was the consolation winner.