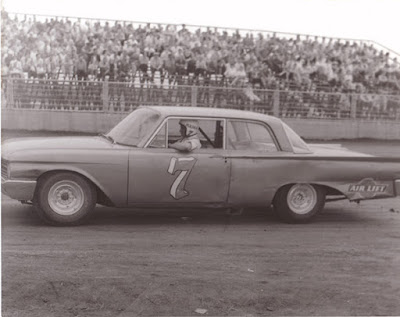 Ramo Stott
Cedar Rapids, Iowa (May 21, 1961) - Ramo Stott of Keokuk piloted his 1961 Ford to an International Motor Contest Association world record breaking first place Sunday afternoon in the 200-lap late model stock car race at Hawkeye Downs.
Stott erased 100-mile mark Don White’s of 1 hour and 33 minutes set in 1958 with a time of 1 hour 31 minutes on the fast Downs half-mile dirt oval.
The near capacity crowd saw two other marks shattered during the afternoon. Another Keokuk driver, Dick Hutcherson, also driving a ’61 Ford, set a time trial record of 25.96 seconds to break the 1957 mark of 26.48 held by Johnny Beauchamp. During the time trials, 6 drivers bettered the record 9 different times.
Hutcherson also set a record for 50 miles. He toured the oval in 45 minutes and 20 seconds to better Ernie Derr's 1960 mark of 45 minutes and 41 seconds.
The race was probably the closest ever witnessed on the Hawkeye Downs track with the first 3 drivers - Stott, Hutcherson and Chub Liebe of Oelwein - finishing bumper to bumper.
Hutcherson jumped to a quick lead and was never headed until a pit stop on the 140th lap gave the lead to Stott. He never lost that lead. "Hutch" was turning lap times of between 26 and 26.05 seconds during his lead.
Derr, the defending IMCA champion and current point leader, moved all the way from 5th place at the start of the race up to 2nd at the three-quarter mark, but slipped to 4th again after a pit stop on the 170th lap.
After grabbing the lead at 140 laps, Stott stopped to refuel during the 143rd lap but was still in the lead after returning to the track.
Even though the race was slowed down for 7 laps by the caution flag, Hutcherson and Stott wheeled their cars to record breaking times.
Results -