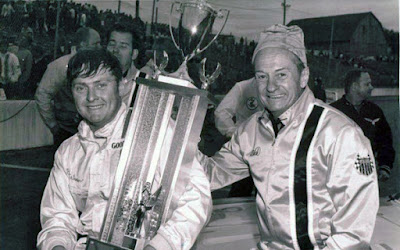 Kaukauna, Wis. (June 1, 1969) – More than 12,000 fans watched as Butch Hartman of South Zanesville, Ohio, finally won a feature, copping the USAC-sanctioned "KK200" and the KK Sports Arena on Sunday afternoon.
While leading the race by almost an entire lap, Don White of Keokuk, Iowa, blew his motor on lap 164 after losing a water hose on the 150th circuit.
Hartman inherited the top spot and was never headed, winning by three-quarter of a lap over runner Jack Bowsher of Springfield, Ohio. Hartman collected $1,300 of a total $12,000 purse.
A.J. Foyt of Houston, Tex., in a ’69 Ford Torino, took an early lead, coming from far back in the pack, then lost out when he pitted on lap 35 to take on fuel while the caution flag was out.
White took over the top spot while Foyt was in the pits, and when A.J. returned he was running in the fifth position until he developed engine trouble. He came in to change a tire on lap 50 and as he resumed the race he blew his engine, spun out in front of the grandstand and retired for the afternoon.
Foyt’s car was a twin to second-place finisher Jack Bowsher’s ’69 Ford Torino, both had special 429 race engines.
White set a track record in taking fast time. The Keokuk, Iowa, speedster was clocked in 22.12 seconds on the half-mile asphalt.
Result –
1.     Bart Hartman, South Zanesville, Ohio
2.     Jack Bowsher, Springfield, Ohio
3.     Roger McCluskey, Tucson, Ariz.
4.     Dick Trickle, Wisconsin Rapids, Wis.
5.     Verlin Eaker, Cedar Rapids, Iowa
6.     Roger Regeth, Milwaukee, Wis.
7.     Ed Hoffman, Niles, Ill.
8.     Bruce Sparrman, Excelsior, Minn.
9.     Jerry Smith, Medina, Wis.
10.   Gene Marmor, River Grove, Ill.