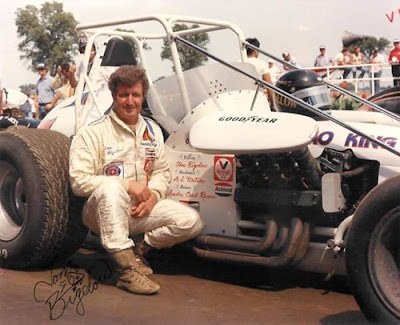 The 11,146 fans saw Du Quoin racing history made as Bigelow, driving the Leader Card Thermo-King with the only Ford engine in the race, was clocked in 59 minutes 30.08 seconds for an average speed of 100.818 miles per hour. Nobody in the midgets, stocks or big cars at Du Quoin had ever gone faster than 98.155 miles per hour (1:01:07.66) clocked by Al Unser in three laps.

A caution came again on laps 85-90 after Jackie Howerton crashed into the fence on the north turn. Fan interest, mounted as the cars bunched “bumper to bumper” in pursuit of Bigelow, who had lapped his field as early as the 21st lap.

Bigelow pulled away and won handily although there was a bit of suspense on the final lap as Gary Bettenhausen passed Billy Cassella in the north turn only a quarter of-a mile from home to take second money of $4,200. The move was like a $1,500 putt because Cassella got only $2,700 for third place.

The race started on a bizarre note as Pancho Carter, the fastest qualifier, threw a gear coming into the straightaway. Everybody passed Carter on the first lap and he retired to the pits.

The official charts showed Bill Vukovich led after one lap but Bigelow led the last 99 circuits.

There were 23 starters instead of 24 because qualifier Bill Puterbaugh dropped out after the time trials and his alternate, Rollie Beale could not get his car started.