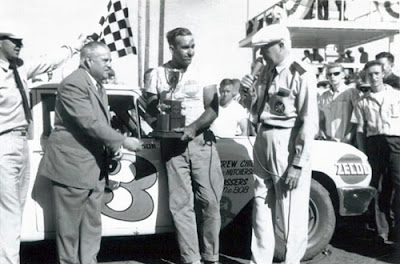 Hutcherson, who picked up $1,000 first place money and 100 points towards the 1963 championship, could thank hard luck on the part of polesitter Ramo Stott and the fast work on the part of his pit crew who sent the point’s leader back into the race after only a 13-second pit stop that didn’t even lose him a spot in the race.

Hutcherson sat his ’63 Ford on the first row outside for the start after Stott piloted his ’63 Plymouth to the day’s fast time during time trials on the one-mile dirt oval; a world record breaking 41.62 seconds.

At the end of the first lap Hutcherson held the lead, but Stott stormed back and the pair raced side by side, Stott on the outside for two circuits before Stott grabbed the lead for good on lap 4. He held the top spot until lap 29, when he pitted for a right front tire, fuel, and a check of his fuel filter.

Stott would pit twice more before the race ended, the second time to repair a fuel line that got pinched in a minor bumping accident.

Hutcherson, meanwhile, was flying high, wide and handsome over the pavement-like surface, trailed by Ernie Derr, also of Keokuk, Iowa, and driving a 1963 Pontiac, Lenny Funk of Otis, Kan., in a new Ford, and Chub Liebe of Oelwein, Iowa, in another new Ford.

Derr got close but never really threatened Hutcherson for the lead, but Funk and Liebe battled occasionally for third and fourth, with Funk staving off the Iowan’s last threat on lap 85.