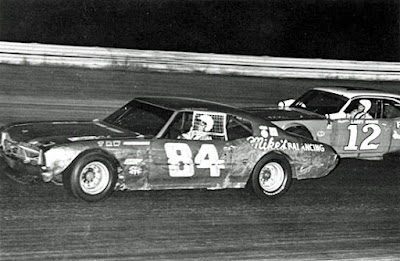 He started fifth and took the lead on lap 12 never to be seriously challenged in a race slowed by only one caution flag on the second lap.

Dick Dunlevy started on the pole after qualifying twelfth and led for five laps before relinquishing the lead to Larry Moore, who had started sixth. Moore held on until lap 12 when Senneker look over.

Senneker gradually pulled away from the field and by the 84th lap had lapped everyone but Moore. Moore was about a straightaway behind on lap 90 when he began losing oil pressure, and on the 95th lap, according to Moore, it locked up solid.

"Everything went real well after I got by Moore," Senneker said. "No problems at all. But out front like that you always hear strange noises like something is going to break. I had no idea where Howe was, I kept looking for him."

He meant he was expecting Ed Howe of Beaverton, Mich., to pull up behind him. Howe was second fastest qualifier and has won many races against Senneker.

But he blew a rear end and had to drop out on the 53rd lap while running third and gaining.

By winning the $35,000 first place money Senneker won the largest purse of his nine year racing career. He is a 27 year-old bachelor with three racing brothers, and he owns the 1971 Chevelle he drove to victory.

"Bob Horton helps me on the car. It's a full time job for both of us," Senneker continued. "We had a bad year until recently. When we got the bugs out of a small engine we've been working with. We won a 100-lapper at Hartford a few weeks ago and last night we won at Grand Rapids."

Tom Maier of Midland, Mich., won the Ohio Championship last month and again drove a steady, flawless race to finish second. And he drove with a cast on his left wrist which was broken two weeks ago at Columbus.

The caution flag came out on the second lap when Bud Middaugh of Massillon hit the rail in turn four while running second, He had to go to the rear for the restart but skillfully worked his way through the pack and finished third.

Fourth place went to John Anderson of Detroit, fresh from a Saturday night win at Angola, Indiana. He started twelfth and, like most drivers, was concerned about tire wear and about selecting tires of the right compound for the race.

"We finally got the front glued," Anderson said, "but we couldn't get a bite coming off the corners. I should have put the same kind of tires on the rear."

In one way Lamarr Marshall of Louisville made the best showing of the night by starting twenty second and finishing fifth. Like Maier, Middaugh and Anderson, he drove a 1969 Chevelle.

The most disappointed man at the track must have been fast qualifier Joe Ruttman of Dearborn Heights, Mich. He cut a tire on the first lap and dropped out of the race, He had qualified first even though it was his first run on Tri-County's asphalt.