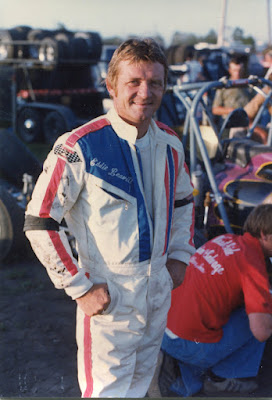 
Knoxville, Iowa (August 9, 1975) – Eddie Leavitt of Kearney, Mo., won the 30-lap National Super Sprint Championship at the Marion County Fairgrounds Saturday night, but he was an extremely worried driver on the final lap.

Although Leavitt, 32, won by nearly three-fourths of a lap over second-place Roger Rager of Mound, Minn., and lapped all but three cars, he slammed into the wall on the 29th lap, severely damaging his car.

“I got into some rough dirt over in turn four and lost control,” said Leavitt. “The rear axle was bent, and I think the wheel may have been damaged. It really vibrated during the last lap, and I was very worried.”


The car did hold together allowing Leavitt to take the checkered flag and prize money that will exceed $3,000. Except for a short time on the first lap, Leavitt led all of the way after starting from the pole position.

Fred Linder of Fremont, Ohio, who had been the fastest qualifier among the 22 starters, held the lead for that brief period. Linder finished fourth behind Rick Ferkel of Tiffin, Ohio. Jan Opperman, of Noxon, Mont., who was the 1971 National champion, finished fifth.

Dick Gaines of Floyd's Knob, Ind., who was the 1974 champion, was involved in an accident during the fifth heat race and was sidelined for the night.

Leavitt gave a lot of credit for the performance of the car to his mechanic Wayne House of Lincoln, Neb. “He went over every bolt about three times before tonight’s race,” said Leavitt. “We did everything that could be done to the car in getting it ready.”

The car is owned by brothers Tom Hill of Williams and Stan Hill of Denver, Colo., and John Ricky of Williams. Leavitt had won three out of the last four features in regular Saturday night racing here.

The race, witnessed by an estimated 10,000 persons, was the last super sprint feature at the track this season.