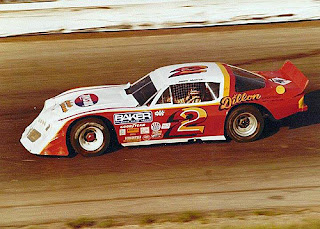 
Anderson, Ind. (August 19, 1978) - Everything finally went right for "The Kid", and Mark Martin, the sensational 19-year-old speed merchant from Batesville, Ark., who currently leads the organization's driver point standings, recorded his first-ever victory on the American Speed Association's "Circuit of Champions" late model stock car trail by winning the 12th annual Redbud 300 classic Saturday at Anderson Speedway.
And while Dame Fortune smiled pleasantly in Martin's direction, the fickle lady turned her back on Dick Trickle, the highly-popular redhead from , just when victory was in sight for him.


Running easily in first place with a commanding lead over Martin, Trickle saw a series of events pile up which eventually put him into the wall in the west turn and out of the race on the banked quarter-mile asphalt oval after he'd relinquished the lead to Martin.


Trickle's troubles actually began around the 220th lap when a piston started to let go in his engine. They, increased when Larry Schuler, Lockport, Ill., coated the track surface with oil all the way around on the 247th lap and the yellow came out for an 18-lap period while the oil was cleaned up.


During that caution period, Martin, over one half-lap behind Trickle, dodged into the pits, changed both right-side tires and got back on the track before the pace car came around which kept him in the same lap with Trickle.


In between those two was Mike Eddy, pole position starter for the race who'd had 119 of the first 204 laps of the race and eventually finished second, four seconds behind Martin at the checkered.


And if you think Lady Luck wasn't holding out her good hand to Martin, the right rear tire on his machine was going flat when he pitted for the tire change.


With fresh rubber on his machine and with Trickle's motor going sour, Martin set sail when the green came out on the 265th lap following the yellow caused by Schuler dumping oil.


He nailed Eddy coming off the fourth turn on the 276lh lap to take over second spot and then pulled past Trickle down the backstretch on lap 286 to grab the top spot he held to the checkered.


Trickle knew he couldn't battle Martin head-to-head to the final flag because of his ailing motor and he was conservatively attempting to hold second spot ahead of Eddy, who'd also slowed his pace to save thinning rubber.


Then, as he came off the fourth turn completing his 295th lap. Trickle's luck wasn’t completely bad when a ball joint snapped; his Firebird skittered all the way down the main stretch, crashed the wall in the first turn and bounced to the bottom of the track.


That snuffed out Trickle's last faint hope for victory.


Under American Speed Association rules, the last five laps of any race of 100 laps or more must be run under the green flag. So, action was suspended after 296 laps because over one-half of the field still on the track and running got around the oval and across the start/finish line before the yellow came out and that lap counted for all cars still on the track.


When the green flew once more, Martin flawlessly wheeled his Camaro through the final mile of competition to record his first-ever ASA victory; a triumph which was highly popular with the nearly 4,000 fans on hand for the race.


Eddy and Joe Shear, , turned in identical one-lap qualifying times of 12.707 seconds (70.494 mph) but Eddy got the pole by qualifying before Shear.