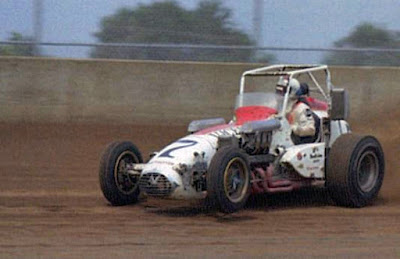 Al Unser in the Vel Miletich  #7

Springfield, Ill. (August 20, 1972) – Al Unser won his second race in as many days at the Illinois State Fairgrounds by capturing the Tony Bettenhausen Memorial Race for USAC championship dirt cars on Sunday afternoon.

He had won the late model stock car race on Saturday on the same one-mile dirt oval.

Even though he won the 100-mile event, the winner had to share the limelight with A.J. Foyt, who made his return to racing after a brief three-month layoff while recovering from injuries. Foyt’s return was an auspicious one; he qualified sixth and quickly made a push for the lead, a goal he attained on the 11th lap.

He led the next 16 laps before eventual winner Unser passed him. It was noticeable that Foyt was having difficulty walking and entering his race car, but he had few problems on the race track, finishing second.

Polesitter Lee Kunzman and Texan Ronnie Burke brought the 29-car field down for the green flag, with the fast qualifier quickly gathering in the lead followed by Burke, Foyt, Ralph Liguori, Unser, and Greg Weld. The Iowan led until Foyt shot past him in the third turn on the 10th lap.

Kunzman held on for a third place finish, even though he lost his brakes on the 40th circuit. Sixteenth starting Bill Puterbaugh drove a great race to finish fifth, just behind Johnny Rutherford.