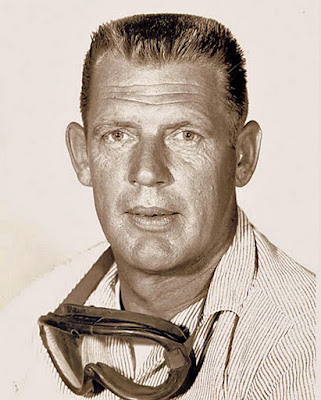 
Thirty-three-year-old Jud Larson of , upset the IMCA point leader, Bobby Grim of in a tension packed 15-lap feature on the half-mile fairgrounds oval.


Piloting a car that carried the Offenhauser motor that Walt Faulkner set a 1952 time trial mark at with, Larson slipped by Grim on a curve of the ninth lap and held onto the lead the remainder of the way to win by 30 yards.


Larson's time was 6 minutes and 42 seconds for the seven and a half mile course. Any chances of a record being set by the 14-car field were eliminated when Bob Wright of lost control of his Offenhauser on the seventh lap. His car careened into the infield and flipped. Wright suffered only a broken nose and bruised arm. It was the first IMCA pileup in two weeks.


Larson's victory was his fifth in only seven big car events this year. Each time he has beaten Grim. A year ago the six foot, 190-pounder won five of six feature events he raced in. Larson, who has been racing for 16 years, spends most of the racing season in stock cars and midgets.


Offenhausers took the bulk of the prize money from the Fayette County Fair. Five of the seven events on the card were won by Offy powered cars. Grim, champion of the circuit for the past two years, had fifth best time trial of 24.00 seconds flat. It was short of his track record at of 23.81 set in 1955. Larson was the second fastest qualifier with a time of 24.10.