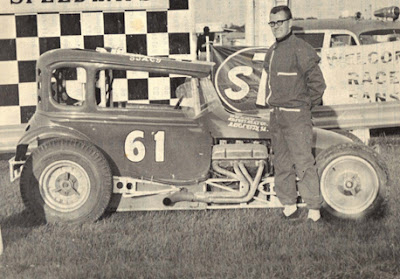 No drivers were injured during the night.
Redmond turned in a fine job of driving in the feature as he held off the repeated challenges of Joel Rasmussen to win. Actually, neither Redmond nor Rasmussen had done much In the way of winning earlier in the evening.
One major mishap swept three cars out of action during the running of the finale.
Wayne Funk spun out on the northwest turn and was hit broadside by Gene Schattschneider's orange sedan, despite efforts of the latter to miss Funk. Schattschneider was then slammed from the rear by Dale Wilhite's speedy pink number, although Wilhite also tried to stop – but couldn't.
Earlier, cars driven by Rich Green and Ted Zeiman shot past the retaining wall on the northeast turn and wound up against the fence north of the track adjoining a parking lot. Green's auto flipped end-over-end and was demolished, while Zeiman returned to action in the feature.
The rear window of an auto owned by William Ostwald, parked in the lot, was broken during the action.
During the B-feature, Ray Hart lost control and perched his car's two right wheels on the north fence. Marv DeWall damaged his car slightly during the handicap when he shot off the first turn at the south end of the track.
One of the finest drives of the night came in a weird race. Running in the fourth heat, DeWall and Schattschneider had a real struggle - and a fast one, before the former won by a hair. All other starters dropped out before the last two or three laps, so the only finishers wound up first and second.
Two or three cars splashed into the water inside the northwest turn during the action.