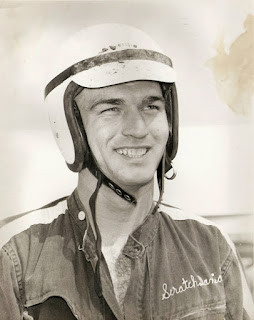 Jerry "Scratch" Daniels
St. Paul, Minn. (August 26, 1963) – Jerry “Scratch” Daniels made it three in a row Monday afternoon at the Minnesota State Fair as he successfully rode the outside rim of the half-mile dirt track.

With his win on Monday, Daniels is undefeated in competition at St. Paul this year. He has won every race he had entered in the three days of sprint car racing and will be a heavy favorite this Saturday and Sunday when the big cars take over for the late model stocks.
Sonny Helms trailed Daniels in the feature, and Dean Mast was third in the Floyd Trevis-built Griffith Chevy.
Starting on the outside of the third row, Daniels took the lead from Mast as the lead duo came down the home stretch on the second lap.
Heat winners were Burdick, Daniels, Helms and Mast. Jerry Richert was the semi-main winner.
Daniels set a 15-lap record in the feature of 6 minutes and 5.38 seconds, which erased the old mark of 6 minutes and 13.04 seconds set by Homer Claytor in 1954.