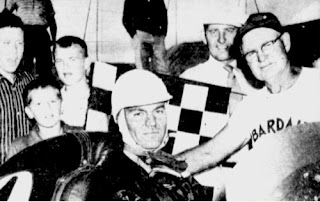 
In Sunday morning show, originally slated for Saturday afternoon, Grim road high in the turns to outclass the Offenhauser-studded field and repeated the same tactic during the afternoons 25-lap highlight to shatter his old track record set two years ago.


Almost stealing the scene from Grim in both programs, however, was Harold Leep of . Leep undoubtedly was instrumental in pressing the three-time IMCA national big car champion to the new mark of 11 minutes and 38 seconds. Some 16,000 fans viewed the afternoon performance.


Trailing Grim and Leep in the first 20-lap feature were Herschel Wagner of ; Bob Cleburg of ; Jack Rounds of Huntington Park, Calif.; and Don Carr of


Third through sixth spots in the 25-lapper went to Arnie Knepper of ; Wagner, Cleburg and Carr. Eddie Loetscher of was seventh.