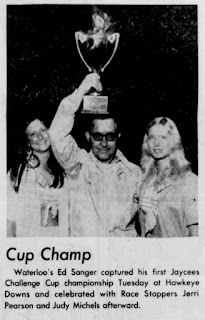 But Ed Sanger was the guy who made the final curtain call in the drama that unfolded on the Hawkeye Downs half-mile dirt oval and won his first Challenge Cup 50-lapper.
The speedster trailed for 22 laps then challenged Eaker in two bumper-to-bumper turns before taking over for good on the 25th tour when Eaker blew a head gasket in the car he borrowed from Mike Frieden.
Sanger's win also broke Eaker's three-year stranglehold on the Cup championship.
In fact, the only other driver to win the Cup has been the late Bill McDonough of . McDonough won the inaugural race and this year's event was held as a memorial to him.
The keenly-competitive field of 24 cars in the feature took two turns of the track before the 50-lapper and the pole position was left vacant during the first lap and the 5,996 fans on hand paid a silent standing salute to McDonough. Then a rousing cheer took place on the second pace lap and the hotshoes then started an almost flag-free dash.
On the 49th lap, a yellow flag came out, but by that time Sanger just held his spot and cruised home.
What was the race driver-car-builder-farmer thinking of those final two laps?
"I just wanted to make sure that I didn't run into any obstructions and that I remained careful going through that fourth turn," said the happy, smiling Sanger.
"There was a pretty rough bump in that fourth and all I needed in those last two turns was to break an axle. You can be going for the checkers, but when an axle breaks you're through," he cautioned.
Amazingly, Eaker was second-best for fast time, 25.35, despite the fact he hadn't raced this spring until Tuesday night and Verlin then dazzled the field by leading through the first 24 laps before that head gasket did him in.
"You race your own race," added Sanger, "but when Eaker went out that was one less top driver I had to contend with.
"Most of the credit for this victory should go to my pit crew," breathed 'Fast Eddy' between handshakes from well wishers. "Those guys have worked overtime getting ready for the season and they were working on the car until Monday night."
The win was worth $1,320 for Sanger, including first place and lap money. Tom Stueding of , set fast time (25.13) and finished second ahead of Curt Hansen of Dike.
Joe Lowder of Davenport, Duane Van Deest of Grundy Center, Joe Merryfield of Des Moines and Karl Sanger, Ed's brother, also of Waterloo won heat races and Don Hoffman of Des Moines won the Trophy Dash
Jim Gerber of Long Grove, driving Ron Weedon's double- zero, won the consolation.
The pilot was slightly injured last week and decided not to run.
Of course, the evening wouldn't have been complete with C.R. native Roger Bear's golden motor sports broadcast voice sweetening the play-by-play and Grand Marshall Lee Kunzman, the Indy driver from Guttenberg also spoke to the big crowd at intermission.
Results –
1.   Ed Sanger,
2.   Tom Stueding,
3.   Curt Hansen, Dike,
4.   Roger Dolan,
5.   Steve Keppler,
6.   Don Hoffman,
7.   Bill Wrich,
8.   Fred Horn,
9.   Joe Merryfield,
10. Bob Kosiski,