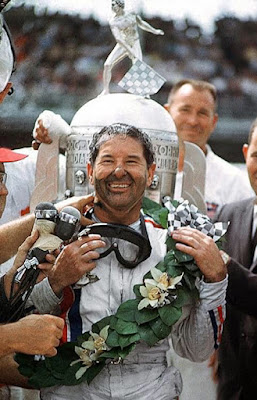 Rodger Ward accepts the laurels of victory after winning his second Indy 500.

Indianapolis, Ind. (May 30, 1962) - Rodger Ward, who dresses like a bank president, plays bridge and golfs in the low 80's, will politely relieve Speedway owner Tony Hulman of something over $100,000 tonight at the annual 500-mile auto race victory dinner.

The 41-year-old master of closed-course racing was just as smooth yesterday when he drove his new A. J. Watson custom-built speedster to his second Memorial Day victory in four years. He set a record of 140.292 miles per hour against A. J. Foyt's year-old mark of 139.13.

It was a remarkable 12th straight start in the world's richest auto race for the veteran Indianapolis sportsman-businessman. And he proved again that you can't beat experience at the 52- year-old track.

Parnelli Jones of Torrance, Calif., who turned the first 150-mile-an-hour lap over the relatively flat track during the time trials, did his best to back up predictions that he would run away from the pack in his Agajanian special.

Jones, in only his second 500, led for more than half of the race but brake line trouble messed up his pit stops and he finished in seventh place.

Foyt, of Houston, Tex., last year's winner, led briefly on one of Jones' pit stops then Ward took charge on the 26th lap. Foyt lost a wheel and was lucky to walk back to the pits.

Ward's teammate, Len Sutton of Portland, Ore., led nine laps after Ward made his last pit stop, then came back to finish second after his own final halt for tires and fuel.

Ward and Sutton drove on the Leader Card team, financed by Robert C. Wilkie of Milwaukee, who also owned Ward's 1959 winning car. Their one-two team finish was the first since Mauri Rose and Bill Holland dominated the late 1940's in the Blue Crown Specials.

Popular Eddie Sachs, Pottstown, Penn., was a hard luck loser for a second straight year. Taking third money, he actually was on the track a shorter time than Ward or Sutton. Sachs finished 8.43 seconds back of Sutton and 20.29 seconds back of Ward, and his pit stops tools 24.5 seconds longer than Ward's efficient stops.

Sachs started in 27th place, gaining 24 positions. Ward had to advance only one spot. He started in second position as a result of the second-best qualifying time against Parnelli's pole winner. Sutton started fourth.

Troy Ruttman of Dearborn, Mich., the 1952 winner, also showed the huge crowd some tremendous hard charging. He started in 30th place and fought his way to second before an overheated engine retired him.

All of the first four finishers broke the record.

For the fourth straight year, the race was run without a fatality. And for the second straight year, Jack Turner of Seattle was the only driver hurt. He suffered a fractured pelvis and other injuries in a four-car pileup early in the race but was reported in good condition.

The wreck also took out Bob Christie, Grants Pass, Ore.; rookie Chuck Rodee, Indianapolis, and rookie Allen Crowe, Springfield, Ill. Shorty Templeman of Seattle, who had been rated a strong contender, got back in the race after bumping the wall and finished eleventh

The amount of the purse, which depends on the gate, will not be known until the victory dinner tonight. It totaled $400,000 last year.