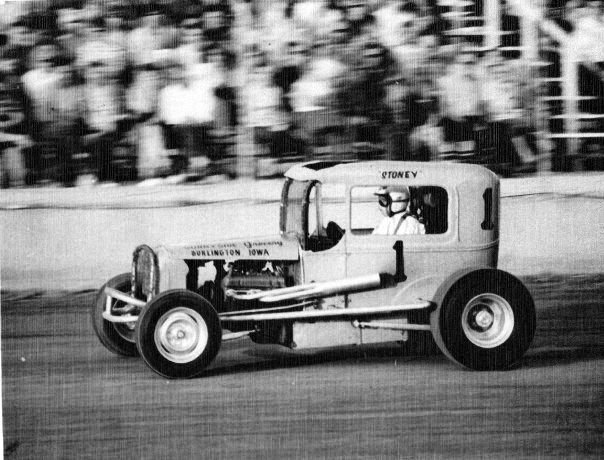 
Modified autos are something new in Southeast Iowa this year.


The modifieds run, along with cadets (jalopies of a sort), at 34 Raceways Park near Middletown once a week.


Races are held each Saturday night at the three-eighths mile track. Tonight fans will get a bonus as the modifieds and cadets will run at the Hawkeye Fairgrounds track as part of the Steamboat Days Celebration.


Duane “Stoney” Stoneking of Oquawka, Ill., who raced about everything but boats in his 16-year career, is the leading point getter at 34 Raceways.


In contention for the 1966 point title are Ron Jackson and Dick McClure of Burlington.


The three men outlined the modified program. All run Model-A’s with 1957 Chevrolet engines. This isn’t the only type car on the track, however.


“Some race ‘32 Plymouths with a slant six motor,” Stoneking said.


Stoneking said older bodies are preferred because they have less weight. Track rules permit bodies from 1928 to 1948.


“Old bodies are getting harder to find,” Jackson said, “With more guys getting into racing.”


The bodies are found in junk yards and behind barns. So far the new operation has 18 modifieds running, but two or three new cars are being added each week.


Stoneking said it costs about $1,000 to build a modified car. The racers have larger radiators, revamped rear ends, and special tires.


Each is required to have a clutch, but most have only one gear. “A car is either in gear or its out,” Jackson said.


The pilot’s race for fun and profit, purses so far have paid $100 to the feature race winner, and $35 to each heat victor. Purses have been paid on a $1,000 guarantee basis for the first four weeks. Soon they will be paid on the basis of 40 percent of the gate receipts.


So far there have been no serious accidents involving the modifieds. “You have a lot more horsepower to keep out of trouble,” McClure said.


“There isn’t so much banging like in the jalopy races,” Jackson said. “You drive with your right foot and not the steering wheel.”


Stoneking pointed out that “drivers have so much money invested in their cars that they back off before causing a wreck.”