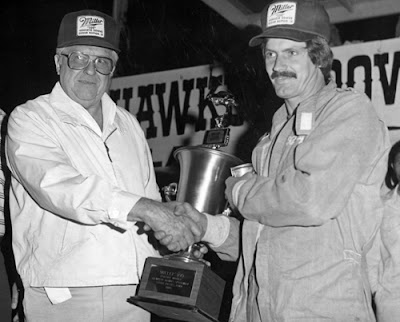 Combs, a 12-year veteran out of Loveland, Ohio, had virtually no trouble after passing Hearst, becoming only the second out-of-state driver to win the annual Fleck Sales Co. sponsored charity race.

“It felt good to win, especially up here,” said the 30-year-old mustachioed driver with a southern drawl after out dueling twenty-eight other drivers for the $2,000 winner’s purse.

“A lot of people said we couldn't win on a flat track with a Howe chassis,” said Combs, who pilots a red and white, all fiberglass body Camaro. “Because it's built more for a high banked track but I guess we proved ‘em wrong.”

After passing Hearst, the Downs NASCAR point leader, Combs cruised to a sizable lead and later admitted that he was just trying to pace himself the rest of the race.

“We had gotten a fairly big lead and my pit crew told me to take it easy so I more or less just paced myself the rest of the way.”

It seemed as though Combs and the feature race would never get started.

After several restarts, the race finally got going before Kalona's Mike Niffenegger and Waterloo's Tom Bartholomew collided on the first turn of lap number two. The wreck, which forced both drivers from the feature, had its effect on Combs, who was accidentally sent to the back of the pack by Downs’ officials.

Combs and his pit crew protested the move while the pileup was getting untangled by wreckers and officials awarded him back his number three position in the lineup where he went on to overtake Hearst for the win.

Curt Hansen, another Downs’ favorite from Dike and winner of the 1976 and 1978 Miller 100, skillfully rallied from the rear of the pack for a seventh place finish.

Osborn captured the 8-lap trophy dash, which featured the top eight lap time qualifiers. Winona, Minnesota's, Lance Matthees had the fastest qualifying lap as he turned in a 23.475-qualifying run in time trials.


This year’s proceeds of the Miller 100, which has donated over $42,000 to various charities in the past seven years, will go to the Iowa Special Olympics program.