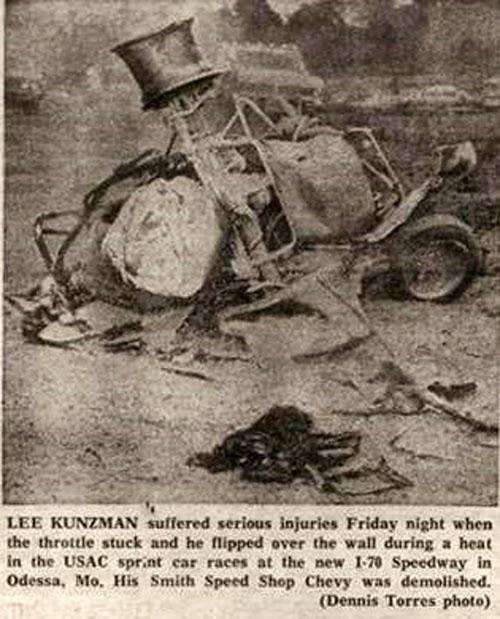 
Gibson paced the field for the first 33 laps of the 40 lapper but slipped out of the groove momentarily in the fourth turn on lap 34, leaving the door open for Bettenhausen.


Driving though of Chevy, Bettenhausen had charged from his 12 starting position. Gibson, in the Forberg Chevy, held on for second place money. Rollie Beale finished third in the Rodeo Bar Chevy, followed by point leader Larry Dickson in the Lay Chevy and Jerry Poland in the Smith Speed Shop No. 5.


Action was fast and wild. The one-lap track record was broken 20 times by 11 drivers during qualifying with Sessions the new record holder with a time of 17.19 seconds. The old record was 18.15 set earlier this year by Jerry Blundy.


Young Lee Kunzman was hospitalized with third-degree burns on his face, second-degree burns on his stomach, a broken left wrist and possible broken back. The throttle stuck on his Smith Speed Shop Chevy No. 8 and the car climbed the wall and when into the wheel fencing. The car rolled over through the fencing, wrapping fencing around the cage. One fence pole pierced the fuel tank started the fire. The car was ablaze as it left the track.


Kunzman crawled free from the burning car. He was listed in serious condition by the intensive care unit at in .


On the seventh lap of the second heat, Bill Puterbaugh made a bid to take the lead from Charlie Masters on the back straightaway and the pair locked wheels, flipping over the fence. Master’s car landed atop Puterbaugh’s mount. Both cars were tangled in the wire fencing. Both drivers were taken to nearby but neither was seriously injured.


Officials blame the angle of the outer wall for the seriousness of the accidents.