1949 – Hinnershitz Speeds to Victory at Heidelberg 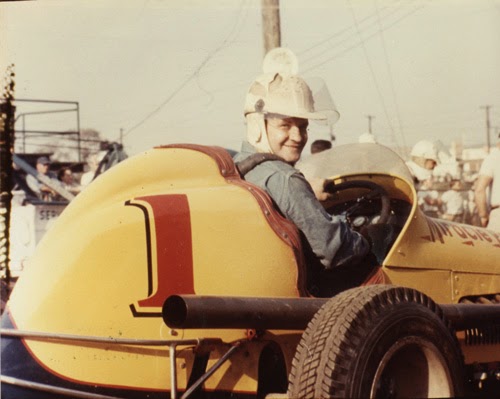 Tommy Hinnershitz
(June 12, 1949) – Tommy Hinnershitz, speed demon from , stole the show at Heidelberg Raceway on Sunday afternoon when he led the entire distance to capture the 30-lap (15-miles) feature in only 9 minutes and 55 seconds.


Hinnershitz lapped the entire field in the process with the exception of second place finisher Johnny Mantz of Hank of , N.J., took home third place money while Mark Light of , finished fourth.


The sunbaked crowd of 17,582, the largest crowd of the season and second best in the two-year history of the track, were disappointed when two of the top notchers were forced out of action in the early stages of the headliner.


Bill Holland, another resident, who was making his second start since capturing the 500-mile classic at on Memorial Day, broke a drive shaft before completing the third lap.


Then, Mack Hellings of , who was waging a terrific duel with Mantz for second place, went into a skid on the south turn on lap 6. He managed to pilot his car to the inner rail, leap out and wave warnings to the rest of the field as they turned on the juice coming out of the bend.


Hinnershitz provided a thrill on the north turn on the first lap when he brushed a pole and his Offenhauser bounced high off the dusty track. However, he quickly got it straightened out and was safely on his way in the long grind to victory.


Still sporting a partially discolored left eye as a result of a crackup he suffered while trying to qualify at Indy, Tommy missed making it a sweep of the program by losing a 3-lap match race to Mack Hellings.


“Hinny” started off the first program of the season by winning the initial qualifying race of 10 laps. His tortoise like time of 6 minutes and 19 seconds was due to a slow drying track.


Promoter Sam Nunis stated that the time of 4 minutes and 21 seconds in the second 10-lap qualifying race won by Johnny Mantz was a record for a semi-banked, half-mile track.