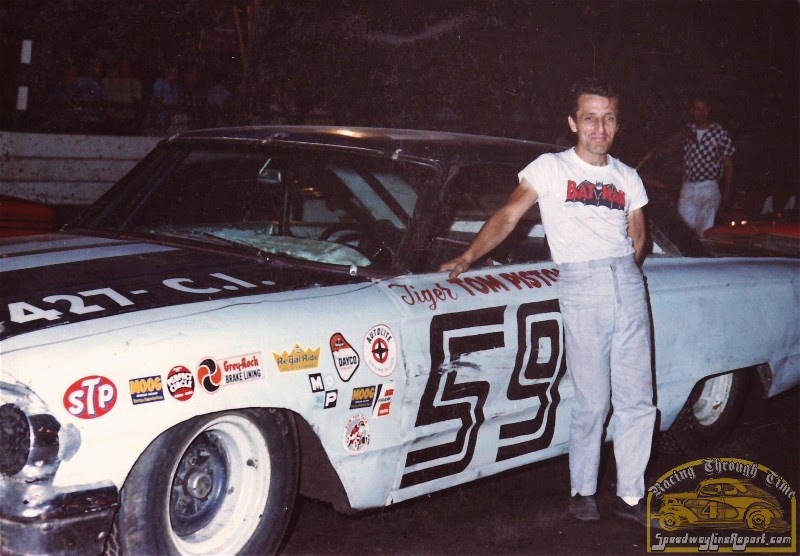 Cumberland, Maryland (June 19, 1966) - Thomas (Tiger Tom) Pistone, father of eight and at 5-3, 120 pounds the smallest driver in NASCAR, celebrated "Dad's Day" yesterday by win in the kickoff feature of the new Cumberland Raceway before a crowd estimated at 5,000.
Pistone made it look easy, grabbing the lead in the third lap and holding it the rest of the way except for a brief period in which he was forced to refuel.


Little Tiger Tom, a native of Norridge, Ill., now residing in Charlotte, N. C., would have made it a "Sunday ride" in his battle-worn 1964 Ford hadn't it been for a determined "Dodge boy" by the name of Iggy Katona from Willis, Mich.


Katona, point leader in ARCA who came here fresh from a 125-lap victory Saturday night in Cleveland, Ohio, dogged Pistone at every turn and at one stage, late in the 200-lap race, was running only five seconds behind. Iggy dropped off after it became apparent with only three laps to go that he wasn't going to catch the Tiger by the tail and wound up second by 17 seconds


It's been a long time between victories for the piston-packin' Pistone - five years, in fact. His last win came in the Virginia 500 at Martinsville in 1961.


Asked when he thought he had Cumberland's 200-lap event in the bag, Pistone replied, "When I got the checkered. Too many things can happen in a race and here lately they've all been happening to me."


Pistone almost didn't make it into the Cumberland 200, blowing a head gasket in practice, which prevented him from running in either one of the two heat events. Radiator stop-leak sealed the crack and held throughout the 1 hour, 35 minute, 26 second, race although shortly after the victory the radiator fell off. For much of the afternoon it was held into place by only one bolt.


Wearing a Batman T-shirt which was soaked with perspiration as he was hoisted to the roof of his No. 59 Ford in the winner's circle, the 37-year-old Pistone wore a smile from ear to ear upon receiving plaudits from six of his fellow NASCAR associates taking part in the ARCA show.


"This is one victory I'll long remember," stated the Tiger, himself a former ARCA pilot, upon accepting the five-foot high Pepsi Cola trophy.


Pistone lost the cap to the gas tank on the very first lap, but he didn't have to refuel until the 102nd lap. The pit stop took 34 seconds. Katona, who pitted later on, got out in 31 seconds.


Mechanical difficulties took their toll of drivers in the 85-degree heat, only nine cars out of 21 starters being on the new hard-packed clay course when the 100-mile race ended. Four of the first six places went to NASCAR pilots, with Neil (Soapy) Castles of Charlotte, N. C. finishing behind Katona in a '64 Dodge for third place.


Wendell Scott of Danville, Va., the only Negro driver in NASCAR, was fourth in a 1965 Ford; Dick Freeman (ARCA) of Dayton Ohio, in a '64 Ford, was fifth, and Buck Baker, three-time Southern 500 winner from Charlotte, finished sixth in a 66 Olds


Pistone averaged 66.666 miles per hour on the four-turned, flat half-mile track, he and the determined Katona being the only drivers to complete the full 200-laps. Katona, incidentally, rode the pole position as the result of establishing the best time – 26.65 seconds, which set a new track record.


The race was run under the caution flag for 13 laps due to a spinout by Tiny Lund on the clubhouse turn a quarter of the way through the race. One of the favorites in the "200," the Cross, S. C. NASCAR star was running fifth in his 1964 red Ford when the engine blew.


There were no injuries as a result of the spin but starter Hans Abbott of Tiffin, Ohio was given some anxious moments by the field, several of the drivers ignoring the yellow flag in attempting to improve their positions. Order wasn't restored until John Marcum, president of ARCA, took the course and led the drivers around for several laps in the safety car.


The victory was worth almost $1,000 to "Papa Pistone”. Katona collected $650 for second and Castles, the movie stunt driver, earned $275 for third.


The first of two eight lap races was won by Baker. Dick Dunlevy of Dayton, Ohio, was second and Leon Van Atta, Bluffton, Ohio, was third. Eight of the nine starters finished.


In another four-miler; Dick Freeman, Dayton, Ohio, was across the finish line first in a Ford. Ralph Latham. Cincinnati, Ohio, trailed the victor, and Kenny Brenner, Akron, Ohio, came in third.