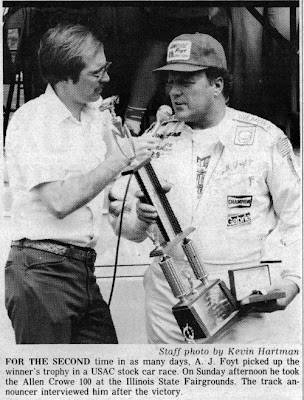 1979 – A.J. Foyt scored his second United States Auto Club stock car triumph in as many days by capturing the crash-riddled Allen Crowe Memorial 100 at the Illinois State Fairgrounds in Springfield on Sunday afternoon, August 19. Coupled with his victory in a 200-mile race at Wisconsin State Fair Park Speedway in Milwaukee on Saturday, the win increased his lead in the divisions’ season standings. Foyt’s domination in the event started in time trials when he toured the mile oval 38.49 seconds (95.530 mph) to nail down the pole position. Foyt propelled his 1978 Camaro into the lead at the drop of the green and despite five cautions, kept the top spot until he pitted for fuel on lap 52. Bob Brevak would inherit the point until he surrendered it to Don White on the 72nd mile of the contest. Foyt would charge ahead of White on lap 89 to grab the lead for good and breezed to the victory from there. White would settle for second while Joe Ruttman nailed down the third spot. Bay Darnell and Brevak would round out the top five. 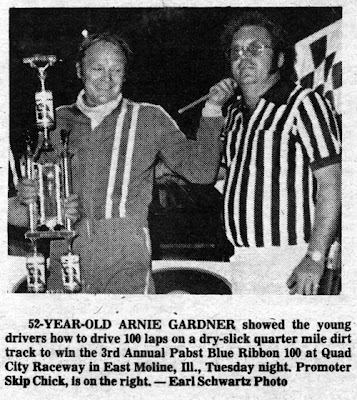 1978 – Arnie Gardner of Geneva, Ill., showed 44 other late model pilots the fast way around a dry-slick quarter-mile track, as he grabbed the glory in the 3rd annual Pabst Blue Ribbon 100 at Quad City Raceway in East Moline, Ill., on August 22. The elder statesman of the event, Gardner started on the outside of the front row, took the lead at the drop of the green and then proceed to put on a driving clinic, lapping more than half of the 22-car field to claim the first prize. The real battle would be for second place as Peoria’s Al Terrell, hometown driver Duane Steffe, Don Bohlander of Gasford, Ill., and Roger Long of Fithian, Ill., battled throughout the long-distant contest with those four hot shoes finishing in that order. Terrell, Don Hoffman of Des Moines, and Ron Weedon of Pleasant Valley, Iowa were heat race winners and Jim Gerber of Long Grove, Iowa, took the semi-feature win. 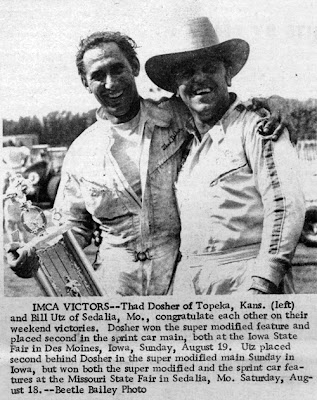 1973 – Bill Utz of Sedalia, Mo., and Thad Dosher of Topeka, Kan., split a pair of IMCA sprint car races over the weekend, with Utz winning the 30-lap main event at the Missouri State Fairgrounds in his hometown on Saturday, August 18 and Dosher picking up the victory the very next day, August 19, at the Iowa State Fairgrounds in Des Moines. The hard-charging Utz cashed in $1,990 after winning the first heat, the STP dash and the 30-lap feature. Utz missed getting the clean sweep on the afternoon finishing second in qualifying to Jerry Atkins of Holts Summit, Mo., who toured the half-mile oval in 24.04 seconds. Utz had to work to earn the first-place money in the main event, eventually getting by David Dwyer of Columbia, Mo., in the late stages when Dwyer’s sprinter suffered a flat tire with only a few laps to go. On Sunday afternoon, Dosher and Utz would get into a wheel to wheel battle for the first half of the 40-lap feature before Dosher was able to secure the lead on lap 19. Dosher would then have to fend off Utz for the remaining second half to claim the $750 first prize. Utz would settle for runner-up honors, while Gene Gennetten of Gladstone, Mo., took third, Ralph Blackett of Des Moines grabbed fourth and Eddie Leavitt of Kearney, Mo., took rounded out the top five finishers. Defending champion Ray Lee Goodwin of Kansas City set fast time, running the slick half-mile in 23.60 seconds.

1972 – Keokuk, Iowa’s Ron Hutcherson dominated the ARCA-sanctioned Royal Triton 50 at the Clark County Fairgrounds in Springfield, Ohio, on Saturday, August 18. Twenty-one drivers started the 50-lap grind with veteran driver and fast qualifier (30.65 seconds) Iggy Katona leading the field to green. Hutcherson, driving a 1971 Ford, made his move for the lead on lap 11 and overpowered Katona on the outside groove between turns one and two. From there, Hutcherson blistered the half-mile; and the field, building up an insurmountable lead by the halfway point of the contest. By the end of the 50-lap contest, Hutcherson had lapped everyone but second place finisher Larry Ashley and was on Ashley’s bumper when the checkers waved. Katona would finish third followed by A. Arnold in fourth and Ed Richardville in fifth.