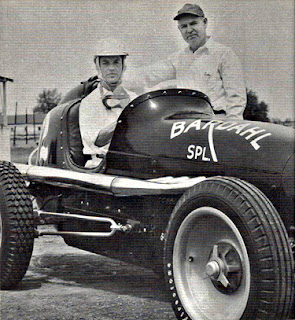 Cedar Rapids, Iowa (August 10, 1958) - Hawkeye Downs strengthened its claim to being one of the fastest and finest tracks in the Midwest on Monday night. Leading drivers of the IMCA skimmed around the oval in performances, which were not only record shattering but also amazing.

More than 5,000 All-Iowa Fair racing fans saw four records smashed - one of them bettered by 23 seconds and another by 13. A fifth mark missed destruction by only a second. Three of the old marks also had been set at the Downs.

Eleven of IMCA's 15 national point leaders time trialed at the Downs and cut loose with screaming speed in a record onslaught probably unequalled in the Downs' racing history.

Bobby Grim, the Indianapolis lead foot who is seeking his 4th consecutive IMCA championship, lost his heat race but he stormed back to establish two of the four new marks.

Forced to an all-out effort by Johnny Pouelson of Gardenia, Calif., in the feature, Grim turned in a tremendous performance in the feature. For 10 laps Grim determinedly sought a path, past the freewheeling Pouelson.

That 10-lap effort plus clear sailing thereafter enabled him to complete the 10 miles in an amazing 7:58.59 - 23 seconds faster than anyone in the IMCA had ever traveled the feature distance.

Pouelson also had his moment of glory in the consolation when he knocked an impressive 15 seconds off the 5-mile IMCA record.

The fourth record came in the opening event of the evening when Al “Cotton” Farmer from Houston, Texas, gave indications of things to come by lowering the 7-lap record by nearly a second.